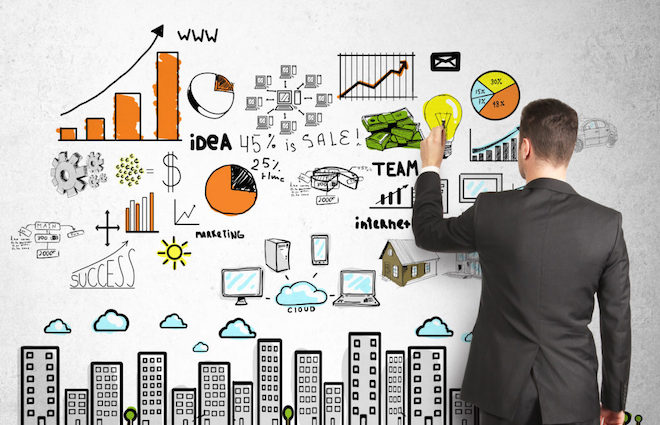 The Sol C. Snider Entrepreneurial Research Center. The William and Phyllis Mack Institute for Innovation Management. The Center for Leadership and Change Management. The Rodney L. White Center for Financial Research. The Samuel Zell and Robert Lurie Real Estate Center. And the list goes on. If the academic research performed by a school is important to you, then Wharton is where you want to be.

In all, The Wharton School at the University of Pennsylvania has 20 research centers and initiatives, ranging from analytics to business ethics to social impact and more. But when it comes to research the school does more — much more. Knowledge@Wharton, its online business analysis journal, has 1.8 million subscribers, and the school also boasts a digital press, a Sirius XM business channel, and one of the most-published faculties in graduate management education. Between 2014 and 2018, Wharton’s profs published 326 articles, almost 70 more than the next closest school.

Given all this and the fact that Wharton Research Data Services enables research for nearly 500 business schools in 36 countries — spreading the intellectual wealth, so to speak — it’s no wonder Wharton is the top-ranked research school in both of the two major rankings that grade academic and intellectual capital. And with the school’s plan to open a new $87 million academic research building in 2020, that status is unlikely to change.

GETTING GRANULAR WITH UT-DALLAS, WHARTON STILL COMES OUT ON TOP

The University of Texas-Dallas Jindal School of Management’s 100-school ranking of both North American and worldwide business schools tracks publications in 24 leading business journals. Each article by a faculty member earns 1 point for their school; Wharton has 178.4 points in the five-year period between 2014 and 2018 and tops both lists. Meanwhile, The Financial Times‘ annual global ranking gives 10% weight to research; its top-ranked research school, as it has been for years, is The Wharton School. Poets&Quants has compiled both 100-school rankings on the following pages.

In both the UT-Dallas North American and global rankings, updated in March, Wharton is trailed by NYU’s Stern School of Business, source of 259 articles in the last four years. Next is Harvard Business School, source of 221 articles, and UT-Dallas’ own Jindal School, from which 220 articles emerged. On the North American ranking, the No. 5 spot is held by Columbia Business School (211 articles), the last school with more than 200 articles; on the global ranking, INSEAD, source of 216 articles, takes fifth place, followed by Columbia.

This ranking has weaknesses, not least the fact that much of what passes for research in business schools is unreadable and not very useful. Most of the academic journals that are measured on UT-Dallas’ database are read only by relatively few scholars in narrow disciplines; after 29 years of using the same journals, a certain staleness has set in. Moreover, critics have long complained that only a small percentage of research done by business schools has any application in the real world, and research bona fides rarely translate to interest from top talent. UT-Dallas, which shows itself ahead of such business schools as UC-Berkeley, UCLA, and London Business School, should be treated like all rankings: with a large grain of salt.

However, an important benefit of the UT-Dallas list is that it is a searchable database, allowing users to see which school’s professors rank according to each of the 24 journals measured. A user who is primarily interested in marketing, for example, can single out the four marketing journals (Journal of Consumer Research, Journal of Marketing, Journal of Marketing Research and Marketing Science) and see how specific schools fare against each other. Wharton is the top school in this sub-category, with 35 published articles between the four journals, followed by Columbia, the University of Chicago Booth School of Business, Duke University’s Fuqua School of Business, and the University of Maryland’s Smith School of Business. Wharton is also the top school in the finance journal sub-category, with 54 articles, followed by NYU Stern’s 52, Chicago Booth’s 47, Columbia’s 45, and Harvard’s 37.

BREAKING DOWN THE FT RESEARCH RANKING

The FT ranking has its own issues, some of which have been mitigated since FT expanded to 50 journals in 2016. Wharton is still the No. 1 school, but it has to share the crown with Harvard, which jumped 15 places from 2018. Harvard had been the runner-up to Wharton in 2016. Next on the list are Stanford Graduate School of Business at No. 3 and Chicago Booth and MIT’s Sloan School of Management tied at No. 4.

As they do in the UT-Dallas worldwide ranking, where they comprise 18 of the top 20 and 66 of 100 total schools, U.S. B-schools dominate FT‘s ranking of research schools. All of the top 9 are U.S. schools; London Business School breaks up the party as the first global school at No. 10 (up 17 spots from the previous year). Because of ties, the U.S. has 20 schools ranked 1-20, and altogether places 51 of 100 schools in the ranking, with most of those landing in the upper half. The next closest country for number of schools in the FT ranking: the UK, with 11. China has six ranked schools.

One major problem with the UT-Dallas ranking is that it is not adjusted for the size of a school’s faculty; as a result, schools which have large faculties tend to perform much better. FT addresses the large-program-versus-small-program conundrum by combining “the absolute number of publications with the number weighted relative to the faculty’s size.” Result: Some small programs make surprising showings high in the ranking. The University of Washington Foster School of Business lands 7th, while Washington University’s Olin Business School is 12th. The University of Texas-Austin McCombs School of Business is 14th — tied with its Lone Star neighbor and author of the competing ranking, UT-Dallas.