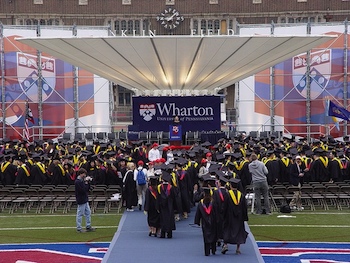 Storm clouds spread across the gothic campus of University of Pennsylvania yesterday (May 15), threatening to thunder on the graduation of one of America’s top business training grounds. As more than 800 Wharton MBA graduates donned their regal blue, red and brown sashes, the possible downpour forced the school to move the ceremony to an indoor basketball arena. Segway-riding security officers gently herded the mob of relatives through the confusion.

The coming storm didn’t dampen the celebratory mood. Neither did last week’s conviction of a prominent Wharton MBA alum in the biggest insider trading case since the 1989 conviction of junk bond king Michael Miliken, another Wharton grad. The billionaire Galleon manager Raj Rajaratnam (’83) was convicted of 14 counts of fraud and conspiracy. The case centered on illegal tips that he received from several people, including two other Wharton MBAs who he first met while studying at the school in the early 1980s. Those Wharton alums pleaded guilty to insider trading in the hopes of receiving more lenient sentencing.

Few graduates would talk on the record about the case or the school’s ethics training. “We are all ethical, we are not speaking for the school, and there’s no comment,” snapped one grad as she helped two friends make last minute adjustments to their gowns.

But like the dark clouds that hung overhead, the embarrassing fall of three Wharton alums in the case was on the minds of many in attendance. “This is something we are hypersensitive to right now,” said a 31-year-old graduate, who would only give his name as Steve. One woman who spoke positively about the school’s ethics teaching on-the-record, later asked repeatedly that her name not be used in the story, after her husband worried that her comments could harm her career prospects. “No one wants to talk to a lone individual, about their entire network,” said graduate David Detrilles, 30, as he prepared to walk with his class.

Detrilles and several others said that the school already placed significant emphasis on ethics. The Galleon chief and his accomplices were “bad apples,” and “bad eggs,” that couldn’t besmirch the record of its huge alumni network, the grads said. One professor of management who attended the ceremony said: “We work hard to train them [in ethics] and we will renew our efforts,” he said. “But something like this could happen at any institution. [The alums in the case] are adults. They go out and bring shame on our institution. Shame on them.”

Wharton’s oldest MBA student to graduate this year said that the quality of the group and the school’s training would prevent future scandal. “I know all 114 people in my [executive MBA] class. And I can’t imagine that happening to any of them,” said Bruce Crocker, a 62-year-old lawyer from Pittsburg. “It is such an ethical group of people.”

FOCUS IS ON PUSHING TO THE EDGE, IDENTIFYING ANY POSSIBLE ADVANTAGE, SAYS WHARTON MBA

But not all the grads shared his sense of optimism. One student, from the United Kingdom, said that the focus of business schools on profit made ethical lapses almost inevitable. “You spend four semesters learning to push to the edge, to identify any possible advantage,” he said. “And just one half of one credit on ethics. That’s just six class sessions. It’s amazing that there aren’t more of these cases.”

Another graduate agreed that more class time should be spent prepping students for real-world moral challenges, but he said the tarnish of the Galleon case would stir the school to action. “There isn’t enough focus on ethics,” said Talal Salman, a 29-year-old grad from Lebanon, who will work at Morgan Stanley. ”The brand has taken a hit and they are going to makes changes to the curriculum.”

As part of already approved revisions to its MBA program, Wharton plans to lengthen its required ethics class to a full semester, starting in the fall. The change was made in reaction to the 2007 financial crisis, not the recent Galleon decision, said Thomas Donaldson, a Wharton business ethics professor. “The crisis threw ethics onto the table as something very serious and there was a lot of soul searching.”

THE GALLEON CASE WAS A SHOCK TO THE COMMUNITY, SAYS A WHARTON ETHICS PROF

Beyond the one required class, ethics is integrated, to varying degrees into other classes at the school, Donaldson added. He believes that Wharton and other business schools can do better. “The Galleon case was a shock to the community,” he conceded. But Donaldson cautions that there are limits to how much influence a business school can have on the future actions of its students. “We can prepare them for the temptations, but we can’t inoculate them completely. The temptations in the business world are huge,” Donaldson said.

Anita, a 27-year-old grad from Uganda was leaving the campus with her family, after the ceremony. The rain still hadn’t come. “We were disappointed to hear this could happen to people who went here,” she said. “We hope we can do better.”

Wharton Dean Tom Robertson, who spoke before the commencement address by Citigroup CEO Vikram Pandit, made no mention of the conviction. “Go forth,” he told the graduates. “Make us proud.”