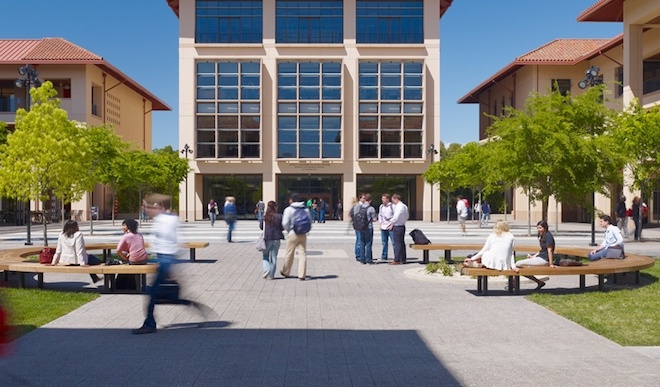 Ordinarily, business schools like to trumpet increases in the average GMAT score for an incoming class. After all, that average metric is an indication of the quality of the incoming students.

And this year, there were plenty of schools that made significant improvements in their class GMATs. Columbia Business School’s average soared by eight full points to 732. MIT Sloan boasted a six-point rise to 728. Wharton and Chicago Booth also hiked up their class averages, though by just one or two points to 732 and 731, respectively. Northwestern University’s Kellogg School of Business this year maintained last year’s record GMAT average it set for an incoming MBA class at 732. The increases, moreover, were recorded in a year when applications were down.

Only one school among the so-called M7 favorites was the contrarian this year: Stanford’s Graduate School of Business, which has long boasted the highest GMAT averages, actually lowered this benchmark number by five full points to 732. The lower average score now puts Stanford in a tie with Columbia, Kellogg and Wharton for having the highest class GMAT average for any prestige MBA program.

Though Stanford is unwilling to publicly admit that it deliberately managed the GMAT number down, it’s almost certain that the school purposely sought to bring its 737 average lower to send a message to applicants. Kirsten Moss, assistant dean of admissions and financial aid,  believed its super high average of 737, achieved in 2016 and 2017, was actually hurting the school by discouraging highly talented applicants from applying to the GSB. “Some of our students tell me that they almost did not apply because they did not come from a ‘top’ university, or they were from the ‘wrong’ industry, or their GMAT or GPA was ‘too low,’” Moss told Poets&Quants in a recent interview. “This is heartbreaking to me.”

It’s not the first time that Stanford has dropped its GMAT average. In 2011, the entering class posted a record average of 739—the highest ever achieved by a prestige business school. The following year, however, the GSB brought the number down by 10 points to 729.

Some admission consultants have little doubt that this latest decline was deliberate. “A five-point drop at a school that has consistently had the highest average GMAT don’t happen by accident,” says Linda Abraham, founder and CEO of Accepted.com, a leading MBA admissions consulting firm. “I think it reflects Kirsten Moss’ focus on leadership and admitting people who will make a difference. She has made it clear that she is genuinely pained when she hears that potentially great applicants to Stanford did not apply because of ‘stats,’ specifically Stanford’s low acceptance rate and GMAT average for entering students.

The five-point decline, which now puts Stanford in a tie with Columbia, Kellogg and Wharton for bragging rights on the highest average GMAT for a prestige MBA program, may well have ranking consequences for the GSB. U.S. News & World Report uses the latest class average GMAT metric in its annual rankings. Because Stanford is disadvantaged by the way U.S. News calculates placement rates for MBA graduates, the lower GMAT could cause Stanford to fall on next year’s U.S. News list from its current fourth place perch. Admission consultants who regularly help candidates apply to Stanford are applauding the move by Moss and Stanford, believing that it will send a clear message to would-be applicants that the GSB is not over-indexing GMAT scores in its admissions decisions. “My theory is this is their way of signaling to the applicant universe that no one should be reluctant to apply to Stanford solely because of a modest GMAT score,” says Alex Min, chief executive of The MBA Exchange, an leading MBA admissions consulting firm. “This is also exactly what Kirsten said when I got to meet her in the summer of 2017.  Using the average score to convey that message is the most credible and convincing way I can think of they might do this.”

Judith S. Hodara, a co-founder and principal of Fortuna Admissions, calls the GMAT decline “a beacon of hope” for both candidates and schools. “No one really won in the increasingly uncomfortable escalation of GMAT averages among the top schools which we have seen in the past decade plus,” says Hodara, who had worked in admissions at Wharton for many years. “It seems pretty clear that this generation is no brighter than the previous one, so the ability to cancel scores and take the test multiple times has distorted the picture, leading candidates to believe that otherwise they will be out of the running based pretty much on seventy five minutes each of data sufficiency and critical reasoning.

“During my nine years in admissions at Wharton and in decision committees, we did not consciously craft a class with one eye on the GMAT average and how that compared to previous years. It remains a valuable measure, and is of course the only one data point that is directly comparable for all applicants. So I was always amazed how scores would track closely to previous years even without any deliberate attempts to do so.”

‘732 IS THE NEW BLACK’ IN ELITE MBA ADMISSIONS

Hodara also notes that when Moss headed up MBA admissions at Harvard Business School, she had been outspoken about making the GMAT optional. “I think that 732 is the new black, and speaks to the conviction that Kirsten Moss brings to her new role at Stanford to identify individuals who she and her team believes will truly make a difference and change the world,” adds Hodara. “During her tenure as Managing Director of Admissions at HBS 17 years ago that she was outspoken about wanting to make the GMAT optional. I’m glad that she has lost none of that belief, and hope that other M7 schools will follow suit to leave the GMAT arm’s race.”

And then, there’s also the issue of what high GMAT scores say about candidates, anyway. “As a ‘leadership geek,’ she probably knows that a stratospheric GMAT hasn’t been shown to correlate with leadership skills,” adds Abraham of Accepted.com. “It correlates to success in the first year of B-school. She is focused on admitting students of initiative and impact whom she feels will change lives, change organizations, and thereby change the world, not necessarily great test takers.”

What impact might Stanford’s decision have on other peer schools? Abraham isn’t sure. “It lessens pressure on other elite programs to keep aiming for ever higher average GMAT scores, but I’m not sure it will end it because some other program may want to claim the highest average GMAT and best ‘class quality’ as reflected by that number,” says Abraham. “Declining application volume and reduced international applications may also play a role in reducing the pressure to aim ever higher for that average GMAT score.”