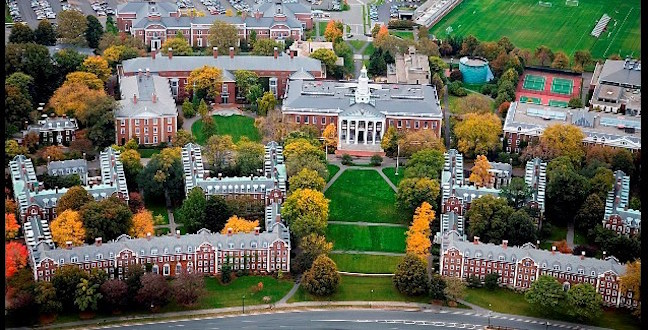 An aerial view of the Harvard Business School campus

After a year in which Harvard Business School’s endowment soared to a record $4 billion and the school generated an unprecedented operating surplus of $104 million, HBS is facing a deficit of $22 million due to the pandemic.

The school expects revenue to plunge by nearly $115 million, a prospect that will turn an expected operating surplus of $43 million into a loss of $22 million in fiscal 2020. Last year, HBS reported revenue of $925 million, up substantially from the year-earlier $856 million.

In an email, HBS Dean Nitin Nohria and Executive Dean for Administration Angela Crispi said the COVID-19 induced recession has led to revenue shortfalls in virtually every part of the school’s operations.

Like many business schools, resource-rich Harvard has found itself with a greatly diminished endowment due to the market crash which will reduce distributions from those funds. The school’s highly lucrative in-person executive education business, which brought in $222 million in fiscal 2019 and is highly dependent on international participants, has been shut down since March 15th and is unlikely to open for some time. HBS has more than 60 on-campus offerings that last year brought more than 12,600 participants to campus.

Even HBS’ equally lucrative Harvard Business Publishing arm, which had record revenue of $262 million last year selling case studies and other materials, has suffered. The school also anticipates a drop in philanthropic support and a likely increase in the need for financial aid to students. MBA tuition, moreover, is highly subsidized by the school and currently frozen to ease the cost burden for students. Student tuition and fee revenue from the MBA program amounted to $140 million last year, roughly 15% of the school’s total revenues. First-year MBA tuition in fiscal 2019 was $73,440, compared with $72,000 last year.

The school’s financial woes coincide with student demands for tuition refunds for classes that have been shifted online. A petition demanding a partial refund for the current spring term has attracted 435 signatures. HBS has turned students down on any tuition reimbursements.

‘LOOKING TO SEE WHAT MIGHT BE POSTPONED, REDUCED, OR HALTED ENTIRELY’

While the school could not have anticipated the coronavirus-fueled recession, CFO Richard Melnick had earlier noted that the school has long been conservative in budgeting revenues and expenses. The HBS budget for 2020 assumed that total revenues would grow less than 1% from the $925 million reported for fiscal 2019. “Our plan for fiscal 2020 reflects this sense of caution,” he wrote. “If economic conditions remain favorable, the school’s financial results are likely to outperform on both the top and bottom lines in fiscal 2020, as they have for the past several years.”

Any hope for that scenario quickly disappeared with the arrival of the pandemic. To manage through the crisis, Nohria and Crispi noted that compensation for faculty and exempt staff will be held flat next year. They wrote that they looked carefully at planned capital projects and cut the school’s budget by more than 75%.

“We will ask faculty members to find efficiencies in their research budgets,” wrote Nohria and Crispi in a Monday email obtained by The Harvard Crimson student newspaper. The pair, who post a daily coronavirus update on the HBS website, made no mention of the school’s financial difficulty in their updates. “We will be looking across expense categories at the School to see what might be postponed, reduced, or halted entirely.”

Nohria and Crispi added that while the future remains uncertain the business school’s “longstanding processes of forecasting and planning, plus our playbook from the 2008 recession” provide insight into the what steps they will need to take to ensure both the immediate and long-term well-being of the school.

HBS administrators said they were still awaiting department-level Q3 re-forecasts as of last Monday. However, Nohria and Crispi noted they would expect to save some money on utilities as a result of a nearly emptied campus. They also wrote that they will explore “every opportunity to realize breakeven” though it may not be possible this late into the year.

“While deficits for HBS are rare, if we do have one, we are fortunate to have healthy reserves from which we can draw in this time of need,” wrote Norhia and Crispi. “However, this is not a sustainable strategy.”

Guided by “a handful of core principles,” the pair wrote that they plan to continue investment in vital programs and activities, ensure employment and benefits for employees for as long as possible, and sustain teaching and research as well as the school at large. Last year, Harvard Business School spent 44% of its $821 million in expenses on salaries and benefits.

“While these steps are not easy, we know that our community has the ingenuity and creativity to operate effectively—to do more with less—in a constrained environment,” they wrote.

The news of HBS’ deficit is likely to cause shudders among business school deans all over the world who preside over institutions that are not nearly as financially stable. In an interview with Poets&Quants, Duke Fuqua School of Business Dean Bill Boulding predicted that many schools and even universities will likely go out of business. “This is going to be a massive hit to business schools and to higher education,” said Boulding, chair of the Graduate Management Admission Council. “It will be far worse than the Great Recession of ’08 in terms of the implications for universities and business schools. The reason is the impact of the last recession was all about endowment values. This crash is going to hurt enrollments….(but also) enrollment income. As a consequence, I do think this will be much harder to come through.

“I suspect that the top business schools are all going to have strong balance sheets. They are going to take a big hit but they will be able to weather that hit and get through to the other side of the COVID-19 crisis. But for schools that don’t have a strong balance sheet, haven’t built up cash to get them through this downturn and are very dependent on tuition income, those schools are going to really struggle to keep their heads above water.”