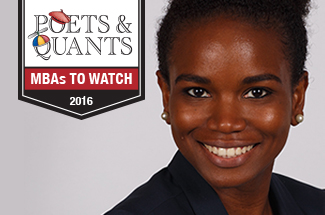 Where did you work before enrolling in business school? I started my career in Montreal in the Investment Banking Division of CIBC, the Canadian Imperial Bank of Commerce. Later, I took over a Financial Analyst role at Air Canada, initially focusing on labor negotiations with major unions. Following this, I was promoted to Financial Analysis Manager.

Where did you intern during the summer of 2015? N/A — one-year program started in September 2015

Where will you be working after graduation? After a rigorous selection process, I have been offered a position as Associate Investment Officer as part of the Young Professionals Program of the International Finance Corporation (IFC), a member of the World Bank Group. My role will be to structure, negotiate, and close new investment deals in large infrastructure projects in developing regions. While I had the opportunity to choose among locations around the world, I picked Nairobi because I wanted to be at the heart of efforts to build solid infrastructure in Africa, which I believe is a fundamental basis to boost and sustain the development of a strong economy on the continent.

Community Work and Leadership Roles in Business School: I serve as Co-Chair of the Cambridge Africa Business Network. I am also the recipient of the Cambridge Merit-Based Bursary and the Ruth Waley Bursary for Women in Finance, which is awarded each year to a female graduate with leadership potential in the field of finance. Finally, I contributed to the class experience by sharing my knowledge, particularly in corporate finance, a tough subject to grasp for students new to it. Being a CFA Charterholder with thorough training in finance, I knew this was my opportunity to step in and support my classmates. I ran study groups sessions, some of which were webcasted live for the entire class to benefit from! This got me the name of “Fatim the Fabulous Finance Fairy.”

Which academic or extracurricular achievement are you most proud of during business school? As co-chair of the Cambridge Africa Network, I am hosting the fifth annual Business in Africa Conference. The conference is an alumni- and student-led initiative to promote robust dialogue around business in Africa. The conference is taking place on May 28 and will feature high-profile speakers from various industries that will discuss the “Transformation of Africa.” Being African myself, I am proud to showcase the unexplored opportunities that the continent has to offer. Several CEOs, VPs, and successful entrepreneurs have already confirmed their attendance. I am excited for the opportunity to meet them and learn from their unique experience and perspective.

What achievement are you most proud of in your professional career? One of the companies I worked for did not have a centralized performance analysis system, which made it difficult for different stakeholders (COO, CFO, branch directors, etc.) to have access to and gain a holistic view of the company’s performance results on a monthly basis. In order to address this issue, I took the lead on implementing an efficient financial tool that would aggregate, consolidate, and analyze the results of all operational branches, representing a $5 billion annual budget. Because stakeholders were initially unenthusiastic about the project, I had to make the output meaningful and relevant enough for them to be convinced to use it. Mission accomplished! The report that I produced quickly became a key decision-making tool and reference for the senior management team, and has since then been instrumental in identifying cost improvement opportunities leading to cost savings. Departments that were not included in my analysis even requested to have a similar tool developed for them.

Who is your favorite professor? Our Operations Management professor, Jane Davies, not only is an incredible professor with a unique, engaging teaching style, but also an inspiration for me. She is the first-ever female director of the Cambridge MBA program, and she can fly a plane!

Favorite MBA Courses? Negotiation. One of the highlights of the course was when I got to roleplay the negotiations between families, government entities, insurance companies, and businesses following the 9/11 terrorist attacks.

Why did you choose this business school? I have an analytical mind, so I started the process by creating a set of parameters to analyze my target schools. Several great business schools ticked the boxes on a few key criteria, including outstanding faculty, diverse cohort, and access to top-tier recruiters. However, there were two parameters on which the Judge Business School stood out: the incredibly strong brand recognition of Cambridge University across the globe, and the unparalleled experience of being exposed to over 800 years of British academic tradition. The “college experience” at Cambridge is quite unique. Dining by the candlelight, surrounded by the legacy of Nobel Prize winners and engaging purposefully with sharp-witted members of your college, you feel as though you are flirting with history. Who would decline an opportunity to sit at the table?

What did you enjoy most about business school? Having experienced political and economic instability while growing up in Africa, I am deeply committed to participating in building a sustainable, safer, and brighter future for the continent. That is why I applied to join a team of fellow MBA students to work on a one-month consulting project for GOAL, an NGO funded by the Irish government. We got to travel to the Northern Uganda region, which is recovering from almost 20 years of war. We met with inspiring entrepreneurs building businesses with a strong social mission to rebuild and revitalize the area. The outcome of our research will contribute to GOAL’s “markets for the poor” initiative, enhancing market facilitation, financial linkage, and capacity-building initiatives in Northern Uganda.

What is the biggest lesson you gained from business school? There is no conflict that a talk over tea and scones cannot fix.

What was the most surprising thing about business school? The biggest surprise for me was that, in the UK, if you have a Cambridge University student card, you can get a free cheeseburger or McFlurry at McDonald’s! (True story!) But let’s be serious here. Being a citizen of both Guinea and Italy, speaking five languages, and having spent my life between Africa, Europe, and North America, I am no stranger to diversity. However, even I was pleasantly surprised by the level of diversity in my cohort, and amazed by how the simplest day-to-day interactions with my classmates increased my cultural awareness.

What was the hardest part of business school? Time management was challenging. I know that MBAs from many schools would tell you that, but in a one-year program like Cambridge, it is as true as ever. At 6 a.m., slightly after sunrise, I was already on the river with my rowing team, ready to push and pull the oars into the cold water. Then, I had to juggle my day not only between classes, coursework, and career prep, but also CABN (Cambridge Africa Business Network) meetings over lunch, debates at the historical Cambridge Union Society in the evening, and karate training at night. Knowing how to prioritize was a key skill to have, one that I quickly added to my “Cambridge survival skill-set kit.”

What’s your best advice to an applicant to your school? Try as much as possible to know really well what you aspire to do in your future career and what you want to get out of the MBA before starting the programme. One year goes by really fast and it is not enough time to start soul-searching.

“I knew I wanted to go to business school when… I realized that practical learning, active participation, and interaction with a diversity of people were a faster way for me to learn and develop new skills, in order to reach another level of both personal and professional fulfillment.”

“If I hadn’t gone to business school, I would be… looking out for a field mission with an international organization in order to get engaged with different types of people and communities and learn as much as I can ‘in the field.’”

Which executive or entrepreneur do you most admire? J.K. Rowling, because her story taught me a lot about failure, perseverance, and resilience. Her manuscript for Harry Potter was rejected 12 times, but she never gave up!

What are your long-term professional goals? In the long-term, I aspire to contribute to the much-needed development of infrastructure in my native Guinea. Over time, I hope to develop expertise that I can leverage to advise government bodies on the best practices in the field.

Who would you most want to thank for your success? My parents have been a huge part of my success. In a country where education of women is not always given prime importance, my late mother never stopped believing in my potential and encouraging me to see no limit to what I could do. She taught me that I must actively take part in building the future of our nation, and find my own way to impact my community. Her memory keeps pushing me to want to succeed.

Fun fact about yourself: “I collect chili … but my collection never lasts long because, as a true African, I love spicy food. I just acquired a chili that is allegedly 800 times hotter than a jalapeno! I wonder if this one will survive!”

Favorite movie: Invictus. Inspiring example of how sports and team spirit can unite a nation.

Favorite vacation spot: This is a tough one to choose. Having worked for an airline, travelling is part of my DNA. In the past three years, I have traveled to a different country at least once a month! This year only, I have already been to Switzerland, Uganda, Senegal, Canada, the U.S., and Germany. And we still have another nine months to end of the year!

Hobbies? I am passionate about martial arts. I have previously practiced tae kwon do and kickboxing, but I am now focusing on karate. I also love painting. Most of my paintings represent African women and landscapes.