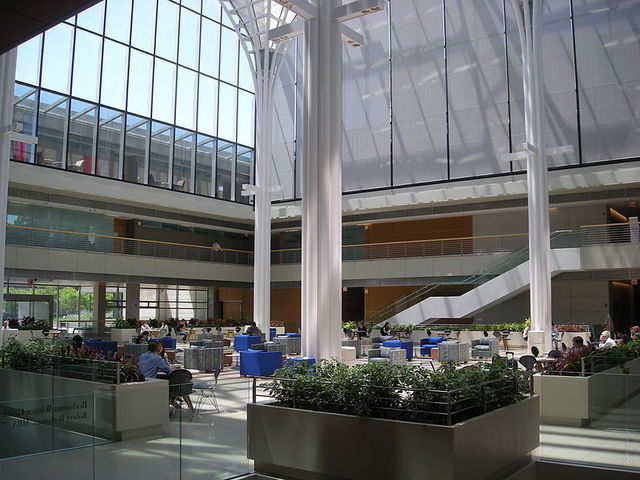 Atrium of the Harper Center, the main building of the Booth School of Business

The Economist ranking is based on two surveys: One to business schools, which accounts for 80% of the ranking, and the other, as noted, to students and alums, accounting for the remaining 20%. The ranking would be even more volatile than it is if The Economist failed to toss in calculations from two previous student surveys gathered in 2016 and 2017, from weighted at 50% of the total student metrics, to diminish what would be even greater year-over-year changes. The British magazine did not disclosed the response rate for its student surveys.

Because the surveys are sent out in the spring, some of the data, including average GMAT scores and the latest compensation of graduates, are a year old. At the University of Virginia’s Darden School, for example, the average GMAT score is stated to be 713 but the latest entering MBA class boosted that average by five points to 718. Darden’s Class of 2018, moreover, landed jobs with average starting salaries this year of $127,767, not the $124,684 figure reported by The Economist and used for its ranking.

And because the vast majority of Darden MBAs—93%—received signing bonuses that averaged $35,430, who graduated from the school this year averaged total salary and bonus of $160,717. Many of the other schools in the ranking would not do nearly as well if The Economist used total starting compensation numbers.

Ranking outcomes turn on such arbitrary, if not mindless, judgments by journalists who have never attended or graduated from business school. Consider, for example, The Economist’s decision to weigh the average GMAT score of an entering class a measly 3.1%. That makes GMATs—a vital metric reflective of the quality of incoming students—less consequential in its ranking than far less important measures such as the number of langauge courses available to MBA students and the range of and access to overseas study programs lasting two or more weeks. The Economist also fails to take into account GRE scores, even though a substantial percentage of MBA students are admitted into programs with a GRE exam and not a GMAT.

The Economist also does not include in its rankings approach a student’s undergraduate track record or the acceptance rate of the business school. So Stanford’s Graduate School of Business, ranked fifth, gets no credit for having the most selective MBA program in the world, admitting only 5% of its applicants, or for enrolling MBA students with the highest undergraduate grade point average, 3.72. Yet, both those measures are highly indicative of the quality of incoming students.

Meantime, The Economist effectively penalizes Stanford because its MBA graduates are so confident of their job prospects that they often seek out unusual opportunities at early stage tech companies and startups that don’t show up on campus or hire on a fixed schedule. Stanford MBAs routinely hold out for opportunities that they really want and expect to get, refusing to settle. Of the top 20 ranked schools this year, Stanford had one of the lowest job offer rates within three months of graduation at 92%. That metric alone, however, accounts for nearly 12% of The Economist ranking or almost four times the weight of average GMAT scores.

It’s often helpful to parse rankings for their individual data points than relying on the judgements of editors who often incorrectly weigh some factors in a ranking. One notable example: The Economist has named the University of Virginia Darden School of Business the No. 1 education experience in the world for the eighth consecutive year. Students surveyed by The Economist also gave Darden profs high marks, rating the school’s faculty first in the world.

32 BUSINESS SCHOOLS DECLINED TO PARTICIPATE IN THE ECONOMIST RANKING

And when it came to schools whose MBAs secured jobs within three months of graduation, at the head of the class among the top 20 were IESE (99%); Chicago Booth, Wharton, Michigan Ross, and MIT Sloan (all at 97%); Duke Fuqua (96%); Northwestern Kellogg, Harvard Business School, Dartmouth Tuck, and Warwick Business School (all at 95%).