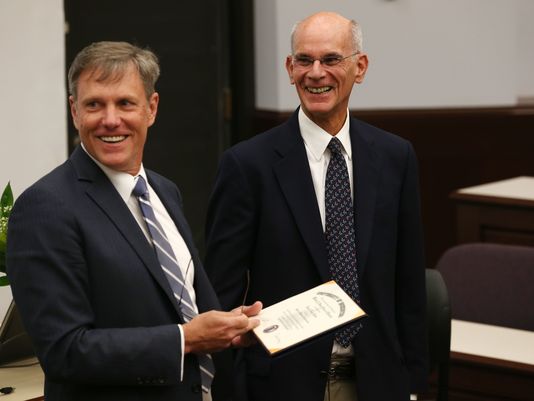 You’ve probably heard that sentiment attached to everything from rekindling romance to breaking bad habits. It comes up in educational circles too. Stuck in a dead end role? Can’t seem to switch careers? Get your MBA! There’s always time.

Add Gerald Gitner among the ranks of those who finished their MBAs later in life. Well, age 70 in Gitner’s case. And we’re not talking about an honorary degree, either. Oh, and did I mention that Gitner is the former chief executive officer of Trans World Airlines and chief financial officer of Pan American World Airways?

Yeah, this is about to get real interesting.

Let’s me take you back to 1968. Marches and mayhem, hippies and hardliners, shootings and lootings. Back then, Gitner, an MBA candidate at the University of Rochester, was finishing his thesis on how political connections helped airlines secure routes. As you can imagine, proving his hypothesis – which reflected an arbitrary process that didn’t follow normal logic – would rely on circumstantial data. I mean, who would publicize potentially career-ending conduct? Such acts are done in closed, dark, smoke-filled rooms for a reason, right?

Alas, Gitner couldn’t marshall the data to back up his assertions – in his professor’s opinion, at least. He rejected Gitner’s thesis and gave him a failing grade. “He said it wasn’t sufficiently quantitative, meaning it didn’t have enough data to support the argument,” Gitner told the Rochester Democrat and Chronicle.

So Gitner withdrew from Rochester, just a thesis shy of earning his MBA. Like so many looking to reinvent himself, he moved to New York City, taking a job with TWA where he (wait for it) planned airline routes. And his MBA education at Rochester – long known as a quant school – came in quite handy. “I was quantitatively oriented,” Gitner says. “I was making decisions based on data and doing all the things I learned at the University of Rochester. It was good enough for the third largest airline in the world at the time, but not for my professor.”

Mind you, Ginter didn’t consider this event to be a turning point. You know, that moment that lit the fire that propelled him to the corner office. Instead, he describes it as “great cocktail chatter.” Heck, he doesn’t even seem to hold a grudge. “I was never resentful or anything,” Gitner says. “That was the system. You have to do what the professor wants, and I didn’t fulfill.”

So if Ginter wasn’t unhappy, how did he end up with an MBA degree…backdated to 1968, no less?

That’s another funny story. His son, Seth, a journalism professor at Syracuse University who’d sat on master’s thesis committees, eventually got wind of the real story behind his father’s time at Rochester. He reached out to the school’s dean, Andrew Ainslie, without his father’s knowledge. Intrigued, Ainslie Googled Ginter – and ended up with quite a shock.  “Up comes this phenomenally impressive person who had the most amazing career in aviation,” Ainslie jokes.

So Ainslie proposed giving Ginter his long overdue MBA. And his idea encountered little opposition as he ran it up the chain. “There really wasn’t much of a sell,” Ainslie said. “This passed at every level.”

Now, Gerald Ginter is a proud MBA alum – and Simon can add another chief executive to its list of luminaries. Still, as Ainslie observes, the story comes with an O. Henry twist. “It was ironic because [the thesis] was on something he turned out to excel at.”