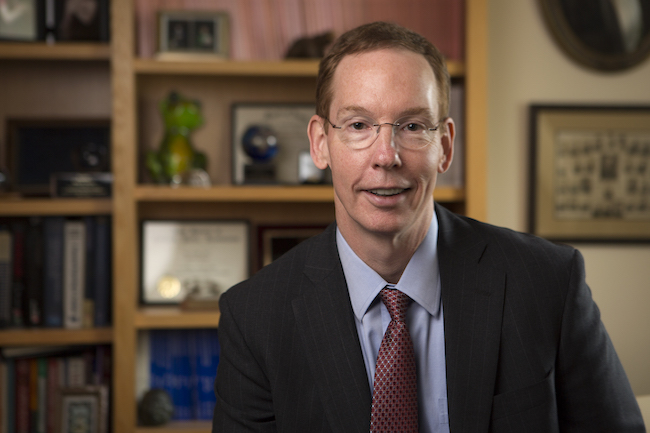 Accounting Professor Mark Nelson was named the 12th dean of Cornell University’s Johnson Graduate School of Management today (June 7), succeeding Soumitra Dutta in the wake of a controversial merger of three of the university’s schools.

The trustees’ vote came amid opposition from the Cornell Faculty Senate and Student Assembly, and despite the urging of one of the university’s top donors, Charles Feeney, who has given Cornell close to $1 billion.

‘A REALLY BIG STEP FORWARD FOR BUSINESS AT CORNELL’

Speaking Tuesday to Poets&Quants, Nelson, the Eleanora and George Landew Professor of Management, says the merger offers “an exciting opportunity” for greater cooperation that benefits Cornell students and faculty. He says despite concerns that the consolidation might lead to internal competition for top talent, he anticipates close interaction that will result in “significant opportunities.”

“Before, (the three schools) were siloed, and we were really not coordinating at all in the old structure, so we could conceivably have two schools going after the same faculty member,” Nelson says. “And it would also be much more difficult to coordinate centers and institutes that give opportunities to our students, or to coordinate the opportunity to hire a faculty member whose teaching load perhaps straddles two schools.

“And so now we’re actually interacting more closely together in a very positive spirit of cooperation. And that’s just a really big step forward for business at Cornell.”

CRITICAL CHALLENGES FOR THE NEW DEAN

Perhaps the thorniest issues facing the Johnson School and the new College of Business: falling numbers of women MBA candidates, and falling numbers of MBA candidates in general. In the past two years, applications are down 7% from 1,834 in 2013-2014, while women in the latest entering MBA class fell to just 26%, one of the lowest percentages of any of Johnson’s peer schools.

Nelson, whose five-year term begins July 1, says turning around those trends will be “a high priority,” but is quick to add that such challenges are not unknown. “The critical challenge that I think everybody in MBA education faces is, we’re really competing for talent, and we’re competing hard,” he says. “So we’ve worked hard in our admissions group, and I think you’re going to see those numbers turn around.

“We’re going to work very hard to address these issues, because I hear you, it’s extremely important that we have an absolutely excellent class coming in the door and that it’s diverse as to gender and other aspects. And I know that internally, the program deans are very focused on it, our admissions group is very focused on it, our Office of Diversity and Inclusion is focused, so one of the things that I need to do over the next couple of months is to be meeting with all of these folks and identify all of the opportunities that we can take to enhance the education we’re providing to our students, and to enhance the scholarship of the place — and to help build community, because that’s a hallmark of a Johnson MBA and we shouldn’t want to lose that.”

Nelson, 53, has been a Johnson faculty member since 1990, the year he received his PhD from Ohio State University. He served as associate dean for academic affairs from 2007 to 2010, overseeing the school’s tenure-track faculty and research. His teaching has focused on intermediate accounting, including MBA courses at Johnson and undergraduate courses at Dyson.

Nelson’s research has been published in journals in accounting and psychology and he has been recognized with the American Accounting Association’s Wildman Medal as well as the AAA’s inaugural Cook Prize for teaching excellence, the journal Auditing’s inaugural best paper award, and the Johnson School’s Faculty Research Award.

Correction: A previous version of this story incorrectly stated that applications at the Johnson School were down 28.3% in two years. They are down 7%.