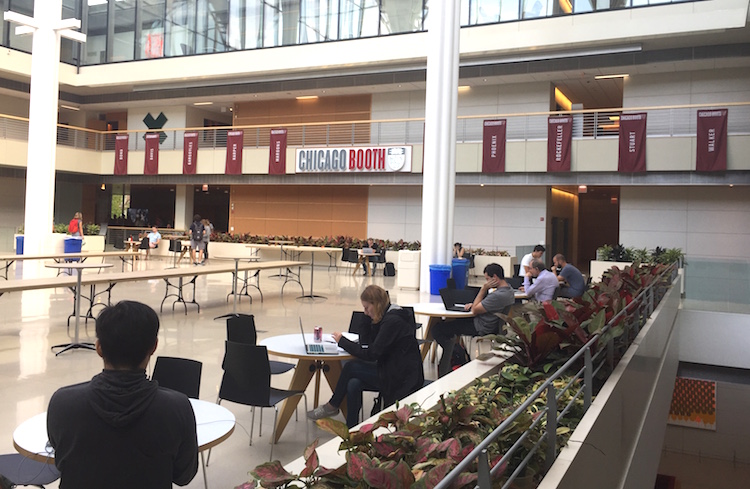 The University of Chicago’s Booth School of Business — Photo by John A. Byrne

2020 being what it is — the most chaotic and disruptive year for MBAs since the Great Recession — it’s understandable that business schools would want to put an asterisk on this year’s employment reports. But if you’re looking for a window on what the employment picture was (and continues to be) for Class of 2020 MBAs, the interim employment report at the University of Chicago Booth School of Business offers some hints.

The Booth School won’t release its final 2020 MBA employment report until November, by which time most other top B-shools in the U.S. and Europe will have posted their jobs numbers as well. Though not all: Because we’ve heard horror stories throughout the summer about internships and full-time jobs being rescinded, it makes sense for schools to give their newly minted MBAs more time to find work. But Booth’s interim report shows some familiar trends and some interesting, clearly Covid-impacted wrinkles — among them: lower minimum salaries in select industries, where we can speculate that MBAs accepted jobs for less money to secure employment in a troubled economy.

There’s also the fact that the interim employment report only accounts for 394 hires, which means nearly 200 members of the MBA Class of 2020 are as-yet-unhired, or at least unaccounted for. And that may be the biggest commentary of all on the pandemic’s effects on the MBA job market.

While it may have been exacerbated by the coronavirus pandemic, the major trend at Booth predates Covid-19. For the second year in a row and third time in the last four years, consulting has unseated finance as the top industry destination for graduates of the Chicago Booth MBA program.

BREAKING DOWN CLASS OF 2020 SALARY NUMBERS

The “interim” tag on the Booth report carries a lot of weight, because a handful of big salaries added later can change the numbers significantly. It also means we don’t get insight into major employers, job sources, or many of the mixed statistics that the final report will contain. But working with available data, we see that Booth MBAs saw a small increase in overall median base salary, to $150,000 from $145,000, while sign-on bonuses remained flat overall at $30,000. Finance led the way with median bonuses of $50K; interestingly, more MBAs report receiving a bonus this year: 67%, up from 63%.

The highest-paid Boothies were those who went into consulting, at a median of $165,000, though finance was close behind at $150,000 (including $150K for investment banking/brokerage, investment management/research, and diversified financial services, and $160K for PE). Tech-bound Booth MBAs made a median $139,345.

Booth’s employment report lacks data on “other” compensation, which Poets&Quants uses to calculate a total compensation figure. We’ve left that out of the total comp numbers here, so Booth Class of 2020 MBAs’ final total number of $170,100 is certainly higher, and the gap with last year’s total $168,060 certainly greater.

Where did the gains in three U.S. regions come from? Abroad. Last year, some 12.8% of Booth MBAs assumed jobs outside the U.S., with 5% in Asia, 4.8% in Latin American and the Caribbean, and just 1.7% in Europe, mainly London, which accounted for 1.1% of the class. This year, unsurprisingly given the turmoil involved in travel, the overall international employment number was way down, to 7.9%, with most Booth MBAs who did take jobs abroad going to Latin America and the Caribbean (3.6%), Asia (2.5%), and Europe (1%).

Outside of the top two industries, the majority of Boothies went to work in tech this year and last — though it was a much smaller number this year than last. In 2019, the vast majority of tech hires went to work in e-commerce and Internet companies (11.7% of the entire class), with software a distant second (4.6%), followed by hardware (1.7%). Those numbers were roughly in line with the year-earlier stats on tech, though e-commerce grads in 2018 accounted for 10.7% of the class. In 2020, as tech-bound grads dropped by nearly 30%, the number of Booth MBAs taking e-commerce jobs fell to 8.4%, and software dropped to 3.8%.

DON’T MISS: A ‘SILVER LINING’ FOR MBAs DURING THE COVID RECESSION or WAR FOR TALENT BETWEEN CONSULTING & FINANCE LEADS TO SOARING MBA PAY AT CHICAGO BOOTH