If you’re shaking your head at the results in the new Bloomberg Businessweek 2021-2022 MBA ranking, you’re not alone. Outright skepticism or laughter is certainly justified. There will be some, granted new bragging rights by their school’s success, who celebrate, of course. And there will be others who will pooh-pooh the poor showing their school received.

Yet, however counterintuitive some of the outcomes are or how mindlessly journalists and editors create these clickbait projects, you’ve got to hand it to Businessweek. Unlike Fortune‘s recent embarrassing efforts to rank business schools, Businessweek puts in the work.

Its editors surveyed 6,640 students, 12,462 alumni, 853 employers, and more than 100 business schools to crank out its ranking of 119 MBA programs around the world.  Sure, the compensation and placement data is a year old. And yes, the admissions data is also from 2020 and does not reflect this year’s entering classes. But this is a serious and substantive undertaking and it produces a treasure trove of data for applicants and school administrators to ponder.

What Businessweek often has trouble explaining is the why behind the results. Little to no commentary is brought to bear on the massive amount of data collected by the magazine, especially commentary that is critical of the ranking itself. We hope to add that perspective and insight in this, our annual analysis of the closely-watched list (here is the last one for Businessweek). The ten biggest surprises this year? Let’s start with the biggest one of all: Wharton’s ninth-place finish. 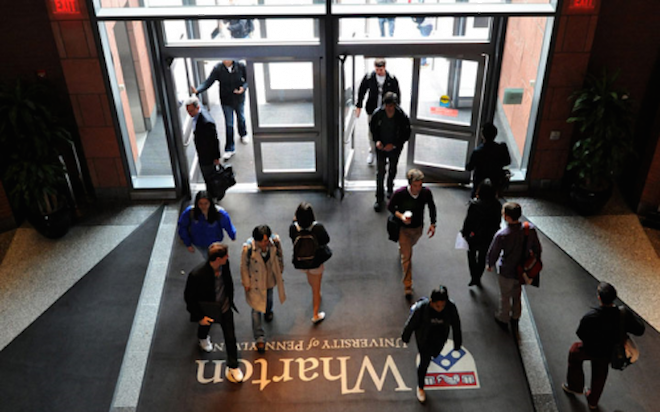 1) Revenge of the COVID Cohort: Why Wharton Plunged

Wharton in ninth place? You’ve got to be kidding.

The Wharton School plummeted three spots this year to rank ninth, its worst showing ever since Businessweek began ranking MBA programs in 1988. Wharton, which has won top honors in the BW ranking four times, had never ranked any lower than sixth in the past. Only three years ago, in 2018, Wharton’s MBA program placed second behind Stanford. But then it slipped four places in 2019 to rank sixth, and this year, the school’s full-time MBA actually shares ninth place with the University of Virgina’s Darden School of Business.

There are two ways to look at this outcome. In Philadelphia, the inevitable opinion is that it’s just a stupid anomaly, a quirky result from an increasing less credible MBA ranking. But if you’re not in the school’s leadership, and therefore not invested in the result, your interpretation of this mediocre showing by Wharton is Businessweek’s way of putting the school in the penalty box. In other words, the ranking methodology worked perfectly.

How so? The students who responded to the magazine’s survey represent the COVID Cohort. Like all students everywhere, their education was disrupted by a pandemic which shifted their expensive classes online and all but eliminated the important social interaction of an MBA program. But unlike many other schools, particularly Stanford, Wharton made a mess of managing the abrupt transition forced by the surge of the virus.

A little history: During the summer of 2020, while most MBA programs announced plans to go hybrid, with a varying mix of in-person and online instruction, Wharton became at one point the only M7 MBA program that took a blended approach off the table. On July 31 it announced that everything would go online. Even before the change, a student-initiated survey at Wharton found that 78% of the MBAs said they were not excited about the upcoming semester, and 94% of students felt the value of their overall MBA experience had diminished by at least 40%. Asked to rate their expectations for the fall semester on a scale of 1 (would rather defer) to 10 (very excited), 78% of the students rated it 5 or below.

The responses, while heavily critical, were submitted to the school with a respectfully-written petition signed at the time by 539 members of the Class of 2021, just under 70% of the second-year MBAs. In that survey and an attached letter, the MBAs urged a more collaborative approach to resolve their frustrations with the administration. “We are hopeful that Penn and Wharton realize their responsibility to their students and are willing to work together to offset our losses. The global pandemic presents a challenging operating environment for everyone, but it also provides us with an unparalleled opportunity for inspiring leadership and setting new standards of excellence. We came here as part of a broader journey to grow into future leaders who operate with integrity even and especially under the most challenging circumstances – putting ethics ahead of profit and foregoing short-term gains for long-term growth. Now is an ideal time for Wharton to lead in practice and set an example for others.”

Their bottom line: “The MBA Class of 2021 joined Wharton with great expectations; however, the experience is rapidly transforming into one of trapped disappointment. We stand willing and ready to engage thoughtfully and proactively. We will continue to advocate for the best interests of our community that we care so deeply about.”

The students surveyed by Businessweek for this ranking are the same students who were angry and frustrated at how the school handled the pandemic.

Yet, there is another important point that needs to be made. Students and alumni know that their responses to Businessweek’s survey questions help to determine the rank and therefore the reputation of their school and their degree. Corporate recruiters, almost all of whom have MBAs granted by the schools from which they recruit new talent, also have a bias. Businessweek concedes this fact, noting that recruiters scored their own schools about 9% higher than other schools on average. It’s an inherent problem in surveying people who have a stake in the outcome of their answers.

The predictable cheerleading from students, alumni and recruiters leads to significant clustering of the results, meaning the differences in scores among the schools on these surveys is so minute as to be statistically insignificant. The only exception to the clustering rule is when students who are dissatisfied with their experience express their frustration through the survey. Just a few unhappy respondents are enough to offset the cheerleaders and hurt the school, exactly because the results across the entire sample are so closely clustered.

That is the reason why Wharton received its worst ranking ever from Businessweek this year. While Wharton’s absolute rank in Businessweek’s “learning index” wasn’t substantially different from last time (it ranked 75th from 70th), its actual score on this index was devastating. Wharton managed to score just 17.9 on this index, down from 59.4 in 2019 and 61.3 in 2018.

Contrast those scores with Stanford whose leadership team worked closely with the student body, giving their MBA students a real voice in how to make difficult decisions on how the pandemic would impact their educational experience. Stanford improved its overall learning rank to seven from 29th and more importantly achieve a score of 74.8, an improvement from the 73.2 two years ago.

In 2018, Wharton placed second behind only Stanford in the overall ranking when its learning index score was 61.3. With a learning score that has fallen by 71% over three student surveys to just 17.9, the school inevitably crashed into its ninth-place tie. Is this sense, Wharton’s ranking is less representative of the quality of the school’s MBA experience, its exceptional students and stellar faculty; it is more a momentary snapshot of a class disappointed in the way the school managed its way through the pandemic.