Founder’s Day April 8, 2018, the anniversary of Thunderbird School’s official charter, was meant to be a celebration. Arizona State University President Michael Crow was there. So was Phoenix mayor, then councilwoman, Kate Gallego. There were podiums, banners, and a crowd of alumni, students, and faculty waiting to hear from the school’s new dean.

The site was carefully chosen: an empty lot on the ASU campus that would one day house the school’s gleaming new headquarters. It was a symbol of new beginnings for a school that had fallen from a once lofty perch.

The day before, nearly 1,400 alumni gathered at Thunderbird’s old campus in Glendale, Arizona. They were there to say goodbye. After 70 years as an independent nonprofit, Thunderbird had been acquired by ASU four years earlier after decades of decline. Their beloved campus amongst the cactus and the jack rabbits was the latest piece of the Thunderbird mystique to be getting the chop. 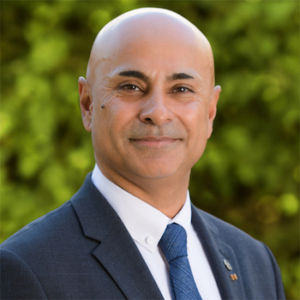 “It was heartbreaking for alumni,” says Sanjeev Khagram, the Thunderbird dean who was first introduced to the school community four years ago on the empty dirt lot.

“The school was in such bad shape, it sort of felt like it was really over. There was this sense of ‘Who is this new guy coming in, and what’s really going to happen?’”

For the literary minded, the metaphor could practically smack one in the face. Thunderbird soared at one time–the pinnacle of global leadership education with students coming from around the world to learn international business before international business was really a thing.  Then it crashed. Nearly burned. It was the business school that nearly went out of business.

However, in the last four years or so, Thunderbird has achieved a remarkable turnaround. Enrollments are way up. The budget is in the black. Its gleaming new global headquarters rose from the pile of dirt on which Khagram had once stood to introduce himself to a skeptical crowd.

“I’ve been in the business world for 40 years, and more than half of my business experience is in presidential positions, or as CEO of global, public companies,” says Hiroshi Hamada, a 1991 Thunderbird alumni, co-chair of the Thunderbird Global Alumni Network and CEO of ARUHI Corporation, the largest mortgage bank in Japan.

“I have, myself, been involved in a lot of turnarounds. But this is a much more amazing story than I have ever seen in my business experience.”

This week, Hamada and more than 2,000 other Thunderbird alumni descended on ASU again. They’re celebrating Thunderbird’s 75th anniversary, after last year’s events were postponed because of the pandemic. This time around, they have a lot to celebrate.

A BUSINESS SCHOOL IN ‘CHRONIC DECLINE’

To gauge the height of Thunderbird’s rise over the last four years, you need a sense of how far it had fallen. So first, a bit of history.

Thunderbird was chartered on April 8, 1946, on the site of a deactivated Army Air training base outside of Phoenix. Lt. General Barton Kyle Yount founded the school to help American men enter an emerging international business environment emerging after World War II. For nearly 30 years, it was the only American business school with an international program and the only one in which graduates were required to be proficient in at least two languages. Its graduates spread across the globe, and boasted leadership in BP, Morgan Stanley, and other top companies.

In the mid-to-late ‘80s, with the fall of the Berlin Wall and other world events fast-tracking globalization, Thunderbird’s international focus was a clear differentiator. Enrollments soared to a peak of about 1,600 in 1992 while its endowment grew from about $1 million in 1982 to $20 million in the late ‘90s. However, as other brand name universities in the U.S. and abroad started their own international programs, Thunderbird’s differentiator lost its cache.

A trend of declining enrollments across business schools in general hit Thunderbird particularly hard, and the school made strategic missteps along the way. Long story short, enrollments dropped to 600 by 2003, including a 75% decline in its full-time MBA enrollment. In fiscal year 2012, the school was $4 million in the red and had $24.5 million in debt. Thunderbird also reported among the lowest graduation employment rates in the country with 76.1% of its graduates not having jobs at commencement.

A PROPOSED VENTURE AND A ‘CIVIL WAR’

In 2013, then president Larry Penley, announced a joint venture with the for-profit education company. At the time, many for-profit endeavors were under heavy scrutiny for operating degree mills with low completion rates and high student debt.

Many of Thunderbird alumni revolted. At least five board members resigned in protest–one claiming the deal would make Thunderbird a “laughing stock.” Nearly 2,000 alumni signed a petition contending that the agreement with Laureate would “cheapen the value of the (Thunderbird) degree,” according to P&Q reporting. The deal collapsed. In July 2014, Arizona State University announced a deal to bring Thunderbird under its umbrella.

Hiroshi Hamada (Thunderbird ’91) is co-chair of the Thunderbird Global Alumni Network and CEO of ARUHI Corporation, the largest mortgage bank in Japan. He also spearheaded fundraising efforts for a Thunderbird Regional Center of Excellence in Tokyo, the first of 20 to open around the world.  (Photo Credit: Thunderbird School of Global Management)

But the fractures in the T-Bird alumni network only grew. Some alumni broke away to form the Thunderbird Independent Alumni Association. The network of about 45,000 T-Birds in more than 140 countries was largely disengaged and disenchanted.

“It was like a civil war. The alumni association split in two and started battling each other. They were shouting at each other, blaming and attacking each other,” Hamada tells P&Q. “Quite frankly, I stayed away from the school because all I heard were the stories of it going down–the number of students, the reputation, the rankings–everything was going down. So emotionally, spiritually or whatever, I just stayed away for more than 20 years.” As Thunderbird was rising and falling in Arizona, Sanjeev Khagram was creating his own story of reinvention. Born in Uganda, Khagram’s family was once among the richest in the country, a family of entrepreneurs on both his mother’s and father’s side. In 1972, when Khagram was about 5 years old, Ugandan president Idi Amin ordered the expulsion of the country’s Asian minority, turning his family into stateless refugees. They fled with just $50.

After spending time in refugee camps in Italy, the family resettled in New Jersey. Khagram watched his mother take over the family and start to rebuild.

“That is an important part of my story, because women’s leadership and entrepreneurship are very important to Thunderbird and to me personally. And it all has to do with my mother’s role in our family,” Khagram tells Poets&Quants.

He started his first businesses with his mother when he was 13. By the time he graduated high school, his family had a chain of five hotel gift shops across New Jersey. He was a first-generation college student, earning a full-ride scholarship to Stanford and designing his own major in development engineering. He dreamed of building large infrastructure projects to improve lives for people around the world.

Throughout his career, he built a resume that allowed him to do just that: He was selected as a World Economic Forum Young Global Leader, was a dean of the Desmond Tutu Peace Centre, and authored UN Secretary General Ban Ki Moon’s Report on the Impacts of the Global Economic Crisis in 2009. He was senior policy and strategy director at the World Commission on Dams and founded organizations that worked in sustainable development. He earned a PhD from Stanford, and he was recruited to help globalize Harvard Business School and the Harvard’s Kennedy School of Government. He looked to Thunderbird for inspiration.

When ASU President Michael Crow called him in 2018, Khagram was semi-retired and living in Los Angeles. Thunderbird was still on the brink of collapse after nearly four years under ASU. Some in the ASU leadership wanted to dismantle the school and absorb its assets, Khagram tells P&Q. Khagram had known Crow for about 20 years, back from when Khagram was at Harvard and Crow was at Columbia. While Crow still believed in Thunderbird and its mission, he told Khagram he needed someone who could turn it around and turn it around quickly. But who would be crazy enough to attach themselves to a falling rocket?

Khagram thought about legacy. Not for him or his career, but for the planet and the kind of world we were leaving the people who come after.

“With ASU, and Thunderbird’s history in global leadership and innovation, that combination doesn’t come around very often. Even though it was a disaster when I came in, both President Crow and I believed that we could turn this thing around. And that Thunderbird would be a force not just for education, but for solutions and impact for the planet.”

Next page: Engineering the turnaround