With the round two application deadline just around the corner at Harvard Business School on Jan. 6th, how can anyone ensure that they will be accepted? Unfortunately there are no assurances at the number one ranked business school which had an acceptance rate of 11% for this year’s entering class. But this analysis may throw some light on what impact GMAT and GPA scores have in an HBS acceptance.

Similar to all other business schools, Harvard does care about your GMAT score. As you can see in the graph below, a higher GMAT results in a better chance of admission. If you want a double digit chance of getting into Harvard you had better score a 740 or higher. Even at 800 the HBS acceptance rate is surprisingly low, predicted to be just 16%.

Next we look at how your undergraduate grade point average affects the Harvard Business School acceptance rate. Obviously, a higher GPA results in a better chance of admission at HBS, but acceptance rates don’t break into the double digits until you hit a 3.7. This reminds me of why I didn’t even bother applying to Harvard with my 3.33 GPA. Damn you engineering, why did you ruin my grades? 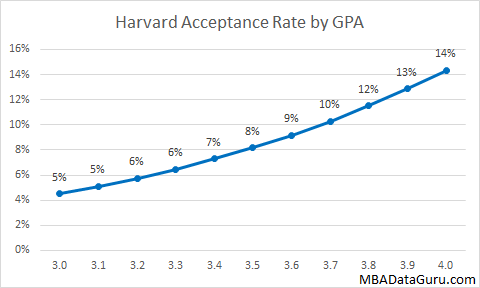 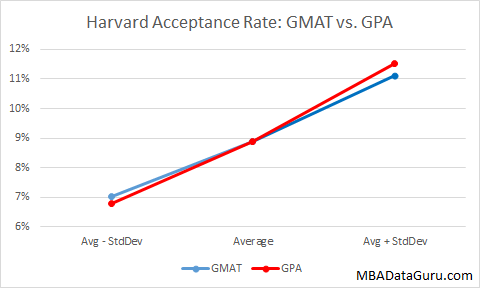 Unlike at NYU Stern or Wharton, Harvard values GPA over GMAT. Harvard’s acceptance rate increases by 30% when GPA increases by one standard deviation but only by 25% when GMAT increases by a standard deviation. This indicates that GPA is more important than GMAT at HBS, and the school is willing to roll the dice on a candidate with low a subpar GMAT score, accepting one candidate last year who had a GMAT of only 550. such as like the guy who was accepted last year with a 550.