Overall, 28% earned bachelor’s degree in business before arriving at Booth. Economics and engineering majors comprise 24% and 20% of the class respectively, with liberal arts and physical sciences making up another 16% and 8% respectively. Surprisingly, consultants encompass the largest segment of the class at 21.25%. However, that is based on how Booth structures its stats, as six finance categories, including investment banking, venture capital, and commercial banking, amount to nearly 37.5% class. Government (6.91%) and Technology (4.22%) are also strongly represented.

Make no mistake: Finance is a big part of Booth’s DNA. In the Class of 2016, 35.9% of the class entered financial services, higher than consulting (30.1%) and technology (15.6%). The dynamics of Booth employment has been evolving over the past decade, however. The Class of 2008 — the pre-meltdown class, that is —banking in droves, with 52.1% choosing to work in financial services —16% less in just eight years. Consulting has made up some of the difference, with 7% more students choosing consulting between the 2008 and 2016 classes. Tech has also popped, rising 9.2% since 2008. Consumer products, supposedly Kellogg’s strengths, also attracted a healthy 7.1% of the 2016 Booth Class. Note that Booth’s 2016 numbers are tentative. Even more, they don’t report actual employers. For that, you need to turn to the 2015 Class, where only one of the top five employers was a financial: McKinsey (44), BCG (29), Bain & Company (18), Amazon (14), and Bank of America (12). 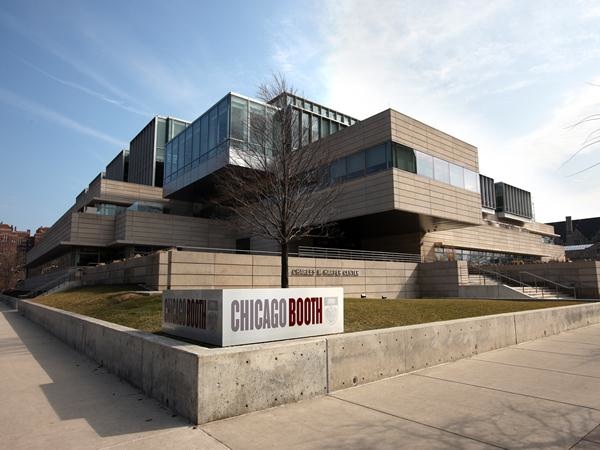 This breadth of disciplines and career options was a game changer for Paris. “Booth did the best job at catering to exactly what I was looking for – rigorous learning, training, and opportunity in entrepreneurship, leadership, and application to the public and social sector. In each of those buckets, some schools are better than others – Booth is exceptional in all.”

In fact, Booth’s quant reputation likely stems from its educational philosophy. Here, academics are cherished. Think of it as Darden without as many cases, with a stellar faculty who range from Nobel Prize winner Eugene Fama (aka “the father of modern finance”) to Austan Goolsbee, a former Obama administration cabinet member and chairman of the Council of Economic Advisers. That doesn’t count Scott Meadow, one of the world’s foremost experts on entrepreneurship. Such instructors demand old school rigorous quantitative analysis that comes with a very specific purpose. “Students who look at Booth are going to see a lot of things related to fundamentals,” Ahlm notes in his 2012 P&Q interview. “We don’t have a lot of industry-focused concentrations. The belief is that markets and organizations are connected by these fundamentals: understanding economics, statistics, accounting, and behavioral sciences. They connect everything. If you understand and can break down problems that are unfamiliar into the familiar and build them back up, you will get more lasting and significant idea generation. You can begin to take what is unfamiliar and make if familiar and ask better questions and get the better solutions.”

This academically rigorous culture, sustained by deep drive research and sharpened by intensive debate and feedback with faculty and peers, has created, in Yunger’s words, “a framework that teaches how to think instead of what to think.” For Daniel Patton, an auxiliary board member of the Joffrey Ballet in Chicago, this approach was the perfect preparation for a long and changing career.”After speaking with a number of alums and current students, it became clear that Booth equips grads with unique problem solving capabilities that provide confidence and leadership on the job and in the world. Quite simply, I like the way Boothies think.”

COULD THE NEXT CHICAGO MAYOR BE A BOOTHIE?

The benefits of Booth’s Chicago locale go without saying (if you don’t count the winters, that is). When you hear from incoming first years, you learn that another big draw was the students’ warm and generous spirit. Guy experienced it first-hand during a class when she visited the campus. “A few students invited me to sit with them and participate in the group activity.  Even though I was only a prospective student at the time, they were eager to know what I thought and challenged me with their follow up questions. I came away feeling confident that Booth would be a welcoming and inclusive community that would continually keep me on my toes.” In looking at the 2018 Class, Ahlm sees them as an “extremely diverse group of people with equally diverse aspirations and thoughts on how they are going to get there.” Their career goals are as unique as the paths each will take at Booth. Ginder, for one intends to remain in medicine. Already the Chief Medical Officer for TimeDoc, a care coordination platform for critically ill patients, Ginder dreams of combining his medical and business talents to become a chief informatics officer of an academic medical center. He’ll be joined in the field by Janiszewski, who recognized that medical school wasn’t for him after his military service, but remains passionate about “innovation and disruption in that space.” Like Ginder, Mould plans to apply technology to solve issues. In her case, the goal is to “empower disadvantage communities to tap into the global market” and “achieve financial independence” in her native Ghana.

Let’s not forget Patton. A Chicago native who loves “rooftops, people, and brunch,” Patton imagines himself following in the footsteps of Richard M. Daley and Rahm Emmanuel. “It has been a long-time dream of mine to become Mayor of Chicago. I love this city more than anything and am a proud product of the Chicago Public Schools. As I grow up as a corporate leader, I hope to develop a skill set that will be one day be useful to serve the people of this awesome city.”

“WHATEVER HE DOES AFTER GRADUATION, I WANT TO BE CLOSE”

For now, the Class of 2018 relishes living in the moment. Their ambitions for the next two years counter the image of cloistered classmates in an urban commuter school. Randaccio, for one, would love for his legacy to reflect the school’s pay-it-forward ethos. He hopes his classmates say that “he gave back as much as he took from this program and he made everyone else around him better.” Paris wants to be remembered as the guy who “gave absolutely everything I had and that I left nothing on the field.” At the same time, Janiszewski sums up his dream legacy in this mantra: “Never afraid to put in the extra effort. Never afraid to help out someone that needed it. Never afraid to have a little fun.”  On the other hand, Marco Ortega, a former Google manager and McKinsey analyst , longs to be one of those dynamic classmates who attracts followers. “Whatever he does after graduation, I want to be close” is how he pictures his impact on the Booth community.

In the end, the whole class would undoubtedly rally around Yunger’s vision for the next two years. When graduation comes and caps are tossed, she wishes for something modest yet universal: “It would have not been the same without me.”

To read profiles of incoming Booth students — along with their advice on tackling the GMAT, applications, and interviews — click on the links below.