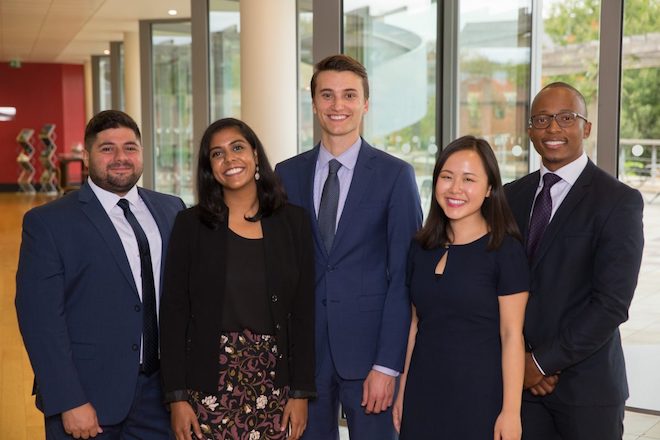 A ‘PERSONABLE’ AND ‘DOWN-TO-EARTH’ BOSS

Among the achievements Krupa is most proud to have worked on, the first he names is the Canada Child Benefit, a $23 billion program that has helped lift an estimated 300,000 children out of poverty. It was a signature program of Trudeau’s. “The benefit gives more to low- and middle-income parents,” Krupa says, “and many consider it Canada’s most significant social policy innovation in a generation.”

In fact, Trudeau — who also serves as Canada’s minister of youth and intergovernmental affairs — is very serious about issues affecting Canadian youth, Krupa says — and that’s “one of the many things I admire about him greatly. He’s tremendously passionate about youth policy, so he takes the issue quite seriously.”

The prime minister, he adds, is “really personable. He takes time to get to know his staff and he’s really down-to-earth. He loves yoga and boxing and being in the outdoors and spending time with his family. And when I was thinking about leaving, he took time to chat with me and sit down, and he was really good about it — he understood that this was something that I had wanted to do and would ultimately allow me to contribute to Canada down the road in an even more impactful way.”

A BUSINESS MODEL TO SOLVE THE WORLD’S PROBLEMS Looking back at his time working for Trudeau, Krupa is filled with optimism. “The fact that the Prime Minister’s message of cultural diversity and inclusion resonated so well, not just in Canada but around the world, is a source of hope for me,” he says. “It’s easy to get cynical today, but despite all the challenges in the world, I believe politics and policy can still be tremendous forces for good.”

Business, too. In Ottawa, Krupa worked with the most diverse and gender-balanced cabinet in Canadian history, which included “incredible leaders” like Finance Minister Bill Morneau, whose background is in business and business education. “Folks with that kind of analytical ability are really able to add more value to the policy development process and leadership in general,” Krupa says.

“I agree with (founder of The Pershing Square Foundation) Bill Ackman when he said a lot of the world’s problems are best solved using a business model.”

That viewpoint made Oxford a logical choice, Krupa says. Though he applied to Stanford GSB, Harvard Business School, and MIT as well, “I wanted to experience something different, outside of North America. My older brother had studied in the UK about seven years ago, and I remember visiting him and felt inspired — so the seed was sort of planted in my mind then.

“I love what Oxford is doing, teaching business principles and business models to empower students to become leaders who are equipped to solve global challenges in a nontraditional business education. I think Stanford and Yale are doing that as well, and that’s the direction we’ll start to see more and more business schools head toward.”

The Pershing Square award, one of the largest offered at Oxford, is worth more than 200,000 Canadian dollars. It affords Krupa the chance to not only get an MBA, but to also get a Master of Public Policy through Oxford’s Blavatnik School of Government, a combination made possible by the school’s 1+1 program. “If you are motivated to study business because you want to help solve world-scale problems, I think the Pershing Square Scholarship is the best opportunity out there,” Krupa says. “I want to use business models to have an impact on as many people as possible, and ultimately have a social impact and improve the well-being of Canadians. The 1+1 was a perfect way to combine my interest in economic policy and business. Because from my experience in Ottawa I knew that in my next steps I wanted to study those things, and there aren’t a lot of programs around the world that combine the two so well.”

Might there be a return to politics in his future?

“It’s possible — I love people. They energize me. My parents raised me to always treat others with kindness and consider their well-being and be curious, and so I think that’s why people energize me, and I believe I have something to learn from everyone.”