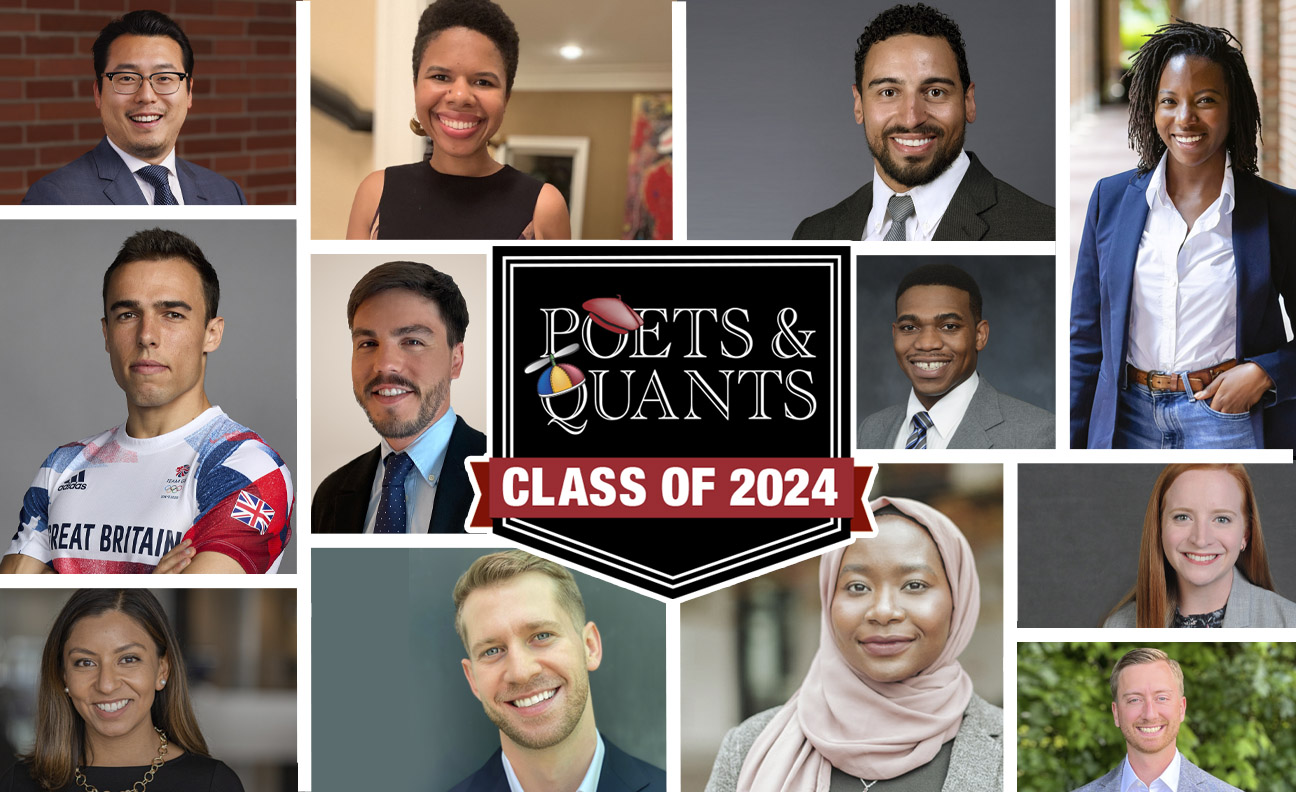 You could say the Class of 2024 is full of contradictions. They push boundaries yet value safety. They embrace hustle while craving balance. And they strive to stand out, even as they seek to fit in. In other words, they want it all – impact, growth, flexibility, meaning, community – no different than MBAs before them…just with a generational twist.

The Class of 2024 came of age amid technological disruption and economic collapse. Now, they face a VUCA world mired in debt and inequity, all shadowed by accelerating climate change. These high stakes – and the possibilities around them – attract a different type of MBA. Look no further than Columbia Business School’s Chris Scanzoni.

A MAN WITH A PLAN He describes himself as a “tree-hugging, gay, vegan former Naval Officer, one who is “driven to lead economy-wide decarbonization and promote regenerative capitalism.” And his ideals aren’t puffery that quickly dissipates in a job hunt. After all, Scanzoni put off college and moved across the country to serve as a political campaign organizer…before he was even old enough to vote. Since then, he has climbed the ranks of the U.S. Navy, ultimately becoming a Tactical Information Operations Officer in the Navy SEALS. In the process, he recognized that his military background offered the perfect launchpad for realizing his passion.

As a Columbia first-year, Scanzoni intends to immerse himself in New York City’s tech startup scene. Beyond business school, he is weighing everything from becoming a Fortune 500 sustainability officer to an EPA administrator. Even politics isn’t off the table. In the meantime, he is planning to use his Columbia MBA to lay the groundwork for grander designs.

“I hope to pivot to venture capital in the climate tech vertical to unlock private investment; scale carbon removal technologies; and implement inclusive, equitable, and actionable strategies to preserve the natural world for future generations.”

45 CLASS PROFILES ON THE WAY

For the MBA Class of 2024, the coast is clear. COVID isn’t tethering students to their apartments or cancelling their treks. In this recession, companies aren’t raining down pay raises and perks so their young talent defers business school, either. The world is back on track. That means another year of Poets&Quants’ “Class of” series. Launched in 2015, the series profiles a dozen students each from 45 of the world’s top full-time MBA programs, including Harvard Business School, INSEAD, Wharton School, and Chicago Booth.

The series operates on several levels. For one, the school stories introduce our readers – many of whom are potential applicants – to the cultural values and programming differentiators of each business school. As a result, candidates are exposed to a variety of MBA programs that may better align with their academic goals and personal values. At the same time, P&Q’s profiles enable readers to see the diverse range of students who populate these programs. Along the way, P&Q demystifies who gets in and how – adding an exclusive Q&A with top school administrators so readers stay current with new developments across these programs. At its core, the “Class of” series is aspirational. The featured MBAs were once applicants – just like many readers. The message: Their successes are within your reach too. Who are some of this year’s most intriguing MBAs? You can start by letting them describe themselves. UCLA Anderson’s Sedric Nesbitt could be the definition for versatility: “Ex-consultant, hip-hop dancer, swimmer, concert enthusiast, world traveler, professional kickballer.” A continent away, INSEAD’s Eric Husney is an “avid gamer, startups and VC enthusiast, [who has} dabbled in NGO work (and is “overly attached” to his dog). At Indiana’s Kelley School, Chabi Gupta’s credentials include being featured in Forbes India as a Top 100 Digital Star who boasts 142,000 followers. Her classmate, Rachel Tuskes, lives by the 3 C’s: “caffeine, carbs, and curiosity. Speaking of C’s, you could say Al Corvah is unquestionably the hype man at Duke’s Fuqua School.

“My friends call me “Cash Money Corvah” for my natural salesman’s flair and infectious energy.”

STANDING ON AN OLYMPIC PODIUM

Energy is defining quality of the Class of 2024. In college, Emory University’s Joel Anifowose ran a food truck. Not to be outdone, HEC Paris’ Jan Debets pedaled over 240 kilometers a week as a pharmacy’s bicycle courier during undergrad. This energy has also fueled innovation too. In his native Peru, Juan Diego Vasquez would rescue cats. Over time, he realized that he needed to develop a sustainable solution to ensure these cats enjoyed a happy life. Combining his engineering and business prowess, he designed space-saving and comfortable cat trees and homes.

“Today, Arquipets is the pioneer and leading custom pet-design Peruvian company, allows for the employment of more than 20 people, and has built a cat shelter that saves dozens of lives,” Vasquez tells P&Q. “Likewise, the company is on track in an ongoing process of innovation, digital transformation, and expansion.”

Ryan Owens jokes that he devoted 11 years towards competing in an event “that lasted a total of 51 seconds.” With those stakes, Owen made those seconds count. A member of the British Cycling Team, Owen captured a Silver Medal in the 2020 Tokyo Olympics in the men’s team sprint. The recognition came after Owen finished 2nd in two World Championships and two European championships. Despite this, he nearly missed out on his crowning moment.

“In March, 2020 I was unofficially selected for Tokyo 2020,” writes the London Business School first-year. “One week later the Olympics were postponed, and I was told I would have to spend the next year earning my place back all over again. Spending 18 months training through lockdowns, cancelled events and constant uncertainty made the step onto the podium in Tokyo feel that much more special.”

BADGE OF HONOR: BEING CALLED OUT BY PRESIDENT TRUMP Speaking of special, Adam Brewster was paid the ultimate compliment that a journalist can receive: “I’ve been quote-tweeted by former President Trump, who called my reporting “Wrong!”” Before joining the University of Michigan’s Ross School, Brewster worked as a political reporter at CBS News, including an eight-month stint “criss-crossing” Iowa during the 2020 Democratic primaries. By the same token, Colby Bermel was assigned the California energy beat as a reporter for Politico, which enabled him to tap into some of the biggest issues of the day.

“I leveraged my deep and diverse source network to break market-moving news before state leaders’ official announcements on controversial proposals to ban fracking, stop offshore drilling in state waters, and help wildfire-sparking electric utilities pay victim claims, among many policy and personnel scoops. But my most meaningful stories were accountability reporting, be it publishing the governor’s tax returns ahead of his recall election, exposing the illegal lobbying tactics of the country’s largest natural gas utility, and highlighting the state’s questionable data and decisions tied to fracking, power plant malfunctions, and energy conservation alerts.”

Some class members served opposite Bermel in the public sector. Yale SOM’s Ali Nourang Syed headed up the Office for Finance and Accounting in Pakistan’s District of Sialkot – home to nearly 4 million people. At the Central Bank of Indonesia, Michael Christian spent five years as an economist. With the advent of COVID, the MIT Sloan MBA urged his Board of Governors to cut rates in early 2020 – making Bank Indonesia one of the first central banks to take this action. Christian’s reputation was further cemented as the pandemic grew.

“I also orchestrated unconventional policy measures, such as the burden-sharing scheme with the Ministry of Finance to fund Indonesia’s COVID-19 spending, a bold move only deployed by four countries, and a bilateral repurchase agreement with the US Fed worth tens-of-billions to stabilize the Rupiah, which depreciated 20% year-to-date in March 2020. The results are that Indonesia’s economic growth and currency were among the least impacted in emerging markets in 2020.”

INSEAD MBA’S WORKPLACE IS A CIRCUS…LITERALLY In high school and college, Tyler Hamilton played drums and sang backup vocals in a rock band. Where does a guy like that end up? Try director of strategy for US Army Special Operations – and now a first-year MBA at Northwestern University’s Kellogg School. By the same token, Wale Lawal comes to Harvard Business School with a Ph.D. in Materials Science and NanoEngineering. Most recently, Lawal served as the Chief-of-Staff to the Commander of the U.S. Air Force Academy. In one of his early tests, heading up the Advanced Explosives Test Range for the Air Force Research Laboratory, Lawal was assigned to turning the facility into a state-of-the-art operation while revamping staff culture. In the process, Lawal produced a 10-year, $150-million-dollar strategic plan, all while boosting revenue and testing frequency.

“Reflecting on this experience, it taught me the importance of fostering a healthy culture, listening to your people, receiving advice from experts, and creating a common goal to bring unity to a team.”

You might be surprised some first-years even came to business school. Georgetown McDonough’s Aniroodh Shankar started out as a surgeon before moving over to consulting at Bain & Company. At this moment, Jaye Aster Broder is probably the most popular first-year at Harvard Business School. She is a former product developer for Oreos, where she worked on everything from manufacturing to quality control.  At 22, INSEAD’s Juliette Cremel opened a Founders Factory, a startup accelerator and incubator, in Paris. However, the Harvard-trained Cremel eventually left her post to pursue a life-long dream…of becoming a circus trainer.

“I get paid to swing upside down on a 6-meter-high trapeze and catch people throwing themselves at me in mid-air,” she jokes.

Page 3: Profiles of 26 MBA candidates from the Class of 2024, including Harvard ,Wharton, INSEAD, Chicago Booth, and more.