There is just something different about Harvard. Crossing the Weeks Bridge, you can feel so inspired and capable – with a wide world ahead and a destiny that awaits. The oldest highest education institution in the US, Harvard has produced 8 American presidents stretching from John Adams to Barack Obama. That doesn’t count 161 Nobel Laureates. Their discoveries range from anesthesia and insulin and their faculty have included Oliver Wendell Holmes and B.F. Skinner. While 97% of their students graduate, their most recognized alumni are often dropouts: Bill Gates, Robert Frost, and Mark Zuckerberg.

That is, unless you count William Randolph Hearst – who got kicked out!

State-of-the-art facilities, rockstar professors, and accomplished classmates – and a $53 billion dollar endowment to boot. Harvard students enjoy the best of everything. You can pursue everything and be anything. When you graduate, the Harvard name confers prestige and credibility – and the connections and security that come with it. That’s because Harvard doesn’t just enroll anyone. When MBAs cross the Charles River for the first time, they know their lives will never be the same.

A SCHOOL WITH INFINITE POSSIBILITIES

In that spirit, the Harvard Business School Class of 2022 isn’t bothering to figure out if they belong. They’re too busy plotting out what’s next and how. After a month in his new Boston digs, Isaac Mungai believes the Harvard mystique comes down to one word: Excellence.

“The rigor employed in the teaching and case experience, coupled with students’ commitment in extracurricular activities in and outside of school really stands out in HBS,” writes the investment analyst from Kenya.

Carolina Romeo holds the distinction of being, at 15, the youngest female athlete to ever compete in a Canadian interuniversity sport. Since then, she has emerged as a a trailblazing team leader at Shell. Thus far, she boils down the Harvard Business School experience to “infinite possibilities.”

“It captures both the excitement for growth and impact and the potential emotion of feeling overwhelmed if you don’t harness the energy effectively,” she cautions. A SENSE OF FAMILY

According to Ziana Kotadia, a ’22 HBS grad, roughly 70-percent of MBA students live on the Harvard Business School campus, creating what she calls a “buzz.” That buzz can be an energy or optimism – or a “sense of family” in the experience of Wale Lawal, a two-time NCAA heavyweight boxing champion. While HBS boasts 90 member cohorts – not to mention thousand member classes – the HBS community does share an unexpected cohesion, if not intimacy.

“You feel a sense of family in every aspect of HBS from your classroom section to your student club,” Lawal observes. “Even for those with a spouse and kids like myself, our families feel just as much a part of if not more bonded to the greater HBS family. Every time I speak to a Harvard alum, they talk about how much they miss those two years at HBS, and I have come to realize what they miss most is being so close to their HBS family, which is a one-of-kind feeling.”

More than a family man, Lawal holds a PhD in Materials Science and Nano Engineering from Rice University. Most recently, he served as the Chief-of-Staff to a 3-Star General and Commander of the U.S. Air Force Academy. Before that, Lawal headed up the Air Force Research Laboratory’s Advanced Explosives Test Range. Here, Lawal faced cultural as much as strategic challenges, as low morale was as big of a hurdle as being six months behind in operational efficiency.

“My military training taught me to hit the ground running,” he notes. “Ultimately, by sharing a clear vision, working with HR, and empowering my operations, I was able to put into practice a set of policy-driven, and data-driven actions that turned the test range around. In the end, those actions allowed me to craft a $150M strategic plan that is currently being funded over a 10-year period, tripling worker satisfaction according to internal surveys. It also enabled us to expand our test frequency by over 50%, which increased our annual revenue from $3M to $5M.”

Amrit Sandhu is another military veteran and family man in the Class of 2024. A surgeon by training, Sandhu served as a Medical Officer in the British Army, where he led a telemedicine trial. “It was a real privilege to be part of a team that delivered a project that had a positive impact on the care patients received, reduced costs and became a template for what can be achieved in remote areas with a limited number of clinicians,” he writes.

Before business school, Jaye Aster Broder worked for Mondelez International developing Oreo products. At the International Finance Corporation, a member of the World Bank, Isaac Mungai earned an award for exemplary performance by structuring one of its highest-performing mobility investments in Africa. At the same time, Yağız Yıldız holds 44 granted US Patents. A product manager at Dell Technologies, Yıldız was involved in developing some of the firm’s flagship projects. That includes Concept ORI, Dell’s first foldable PC system.

“I was the lead engineer for a global team of 20 engineers, tasked to work with the company supplying the new foldable panel,” he writes. “Since we only had one shot at succeeding, I had to design the system with various contingencies by anticipating what could go wrong. The initial system bring-up was nothing short of a movie, but we came through by overcoming numerous technical challenges and delivering the concept.”

Carolina Romeo encountered similar challenges at Shell. At 24, she became the Argentina operations’ first female completions supervisor – the person responsible for maximizing production and minimizing costs at wells. For her, the position meant shouldering the additional responsibility of being a role model – and chipping away at long-cemented in cultural mindsets.

“My people-first approach helped to change how we worked and men’s expectations of a supervisor, Romeo writes. “Initially, workers often mistook me for the safety representative. When this would happen, I learned to take an educational approach as, more often than not, a confrontation does not drive lasting change. I was open to having tough conversations and remained curious about their biases. I found that people always had a reason for their beliefs. Through conversation, most were open to alternative views.” 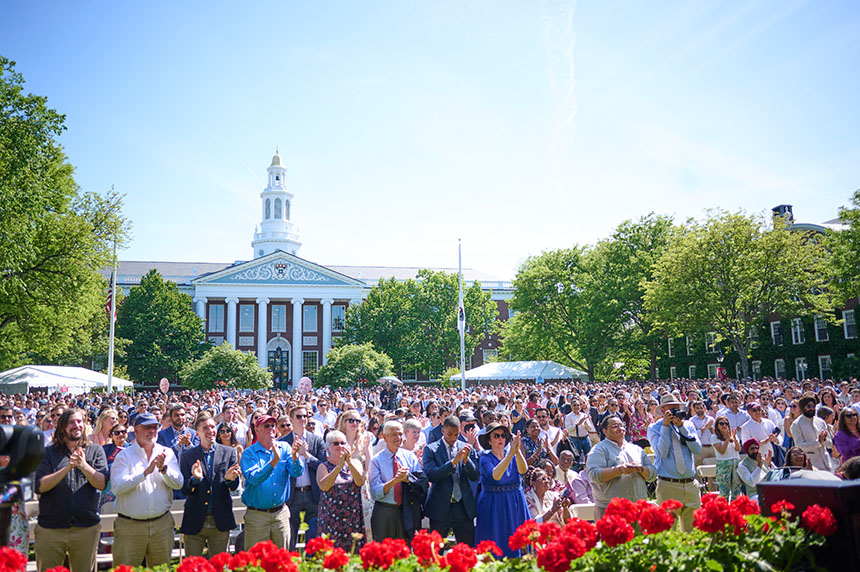 FROM WESTBRIDGE TO WALGREENS

The Class of 2024 also worked to make a social difference in a variety of industries. Yina Sun operated in the energy and sustainability space. She helped to bring two of New England’s largest solar energy projects online, creating over a half billion dollars in CAPEX and delivering renewable energy to 70,000 homes.

For Ramprashanth Mohanasundaram, the call to serve came in under-resourced rural India. On a personal level, he has provided weekly tutoring and mentorship to children in his village, along creating a fund to support their education. However, his scope has expanded well beyond the confines of home. “Professionally, my biggest achievement has been to co-lead WestBridge’s ‘Rural Lending’ practise, investing $450M and supporting rural lending institutions that focus on enabling affordable credit to rural India – 40% of which is still plagued by informal credit.”

Growing up, Hannah Henderson’s parents operated an old-fashioned candy story. And Henderson has remained in retail, most recently working at Walgreen’s in customer insights. For the past year, her mission has been cutting costs on products with artificially high prices from past promotions and discounts.

“With the help of my team and a consulting firm, we identified thousands of items that our customers heavily shop,” she explains. “We then lowered prices on these items, investing a significant part of our budget in this activity. We also fought price increases during inflationary times to protect these items for our customers. This project just finished rolling out to all Walgreens stores, and it feels good to walk in and see that I helped make a difference. With over 9,000 stores, Walgreens has a huge role to play in making our store accessible to shop at for all customers.”

This impulse to act – to find ways to make their industries more equitable and effective – was one reason why the Class of 2024 chose to pursue an MBA. Carolina Romeo, for one, hopes to play a “devil’s advocate” role in help companies decide where to best invest. Her inspiration came from a line in an International Women’s Day speech, where speaker asked the question that’s on every MBA’s mind: “We have 3-4 decades in our professional careers to make an impact. What will you choose to make an impact on?” For Amrit Sandhu, that meant stepping back and looking at the big picture to maximize his impact.

“I loved my job as a doctor and interacting with patients,” he admits. “However, I recognized there are many issues that prevent widespread improvement in care for all and I wanted to scale up the impact I have by addressing some of these issues. It took me a while to acknowledge that I can still have a positive impact on a patient’s journey without being at the patient’s bedside. Once I had this realization, it felt natural to branch out and pursue and MBA in order to prepare for a significant career change.”

Doing that means being around the right people who share their values as much as their commitment. “[My classmates] are naturally energetic, thoughtful, and opinionated, yet open-minded, passionate, sharp, inspiring and ambitious,” observes Carolina Romeo. “It has been fun to get to know each person’s story and to explore the diverse paths that are possible from the same degree.” As a whole, the 1,015 members of the Class of 2024 represent the largest student body in the history of Harvard Business School – though 10% of the class includes students who took COVID-related deferrals. That proved helpful as the school received 8,264 applications during the 2021-2022 recruiting cycle. To put that number into context, HBS processed 10,351 applications for a spot in the Class of 2019. Just last year, 9,773 candidates submitted applications for a seat.

Beyond that, the numbers are relatively consistent compared to previous intakes. The school accepted a shade under 1 of every 10 applications, with the school traditionally hovering in the 11%-12% range. By the same token, 87% of accepted applicants ultimately enrolled at HBS, slightly down from the previous years where the percentage sat in the low 90s. The median GMAT held steady at 730, as scores stretched from 540 to 790. In fact, the 540 GMAT is the lowest that HBS has accepted since 2015 (510).  Median GREs remained a daunting 326, as verbal and quant scores were evenly split at 163. Average GPA scores inched up to 3.70.

Academically, the Class of 2024 matriculated at 160 international and 134 American higher education institutions. 42% majored in STEM-related disciplines, a point below the Class of 2023 – but also six points higher than seven years ago. Another 43% studied Economics and Business, which had been 45% in 2015. The remaining 15% hold degrees in the Social Sciences, down four points from the Class of 2017. In terms of professional experience, Harvard Business School include students from seemingly every industry. Consulting and Venture Capital professionals each notched 16% of the class seats. High Tech and Communications make up 14% of the student body followed by Financial Services at 10%. The remainder of the class features students from Manufacturing and Energy (9%), Consumer Products (9%), Healthcare (8%), Government and Education (6%), and Media and Entertainment (4%). Military veterans account for another 4% of the class.