For the second time in the six years Poets&Quants has ranked online MBA programs, Indiana University’s Kelley Direct MBA program finished atop all other online MBAs. A pioneer in the online space, having launched its remote MBA 22 years ago with 14 students, Kelley becomes only the second program to top our rankings twice (2021 and 2023), joining Carnegie Mellon University’s Tepper School of Business (2018 and 2020).

Kelley, which last year put into the world more than 700 online MBA and master’s graduates, finished second for three straight years (2018, 2019, and 2020) before winning in 2021. In 2022, Kelley dropped to fifth, but catapulted back to the top spot this year, making it No. 1 in two out of the previous three years. Besides Carnegie Mellon, no other school has been as dominant in our rankings as Kelley. 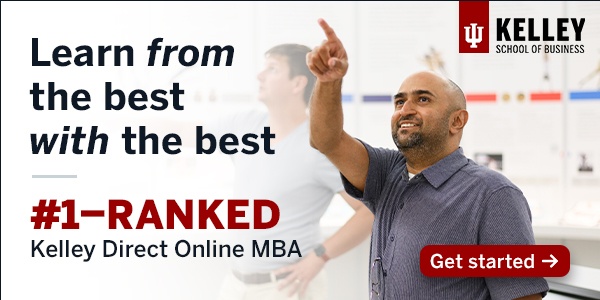 Speaking of the Tepper School, CMU placed second in this year’s ranking, exactly where it placed the past two years. Following CMU is the University of Southern California’s Marshall School of Business in third, down two spots from last year when USC took first. Tepper and Marshall also happen to be two of the most expensive online MBA programs, with Tepper’s total cost being between $109,200 and $145,600 depending on if a student takes the accelerated option or not, and USC’s program costing $119,822. Kelley’s program is now estimated to cost $82,158. Following Indiana, Carnegie Mellon, and Southern California is the University of Michigan Ross School of Business’s newbie OMBA program debuting in fourth place. Launched in 2019, Ross just graduated its first cohort, making it eligible for our ranking. Not surprisingly for a school of its prestige, Michigan Ross crashed our rankings with a stellar finish. Like CMU and USC, Ross is one of the most expensive options with a price tag of $120,000 for Michigan residents and $131,000 for non-residents.

INDIANA KELLEY’S DOMINANCE, WINNERS AND LOSERS IN THIS YEAR’S RANKING

Indiana Kelley remains one of the most consistent and dominant programs in the six-year history of this ranking. It’s never placed outside of the top five, and besides Carnegie Mellon, has more No. 1 finishes than any other program. Enrolling more than 1,500 students and with an acceptance rate of 35% for this past year, Kelley is one of the largest and most selective OMBA programs in the world. Its average GMAT score for this past year’s cohort was 675, with an average undergraduate GPA of 3.4. The average work of most recently entering students is ten years, and students take an average of 27 months to complete the program.

While schools such as Kelley, Carnegie Mellon, and USC have consistently remained at the top of the list, we’ve seen other schools take significant climbs and plunges in this year’s ranking. This year’s biggest winner is the University of Texas at Dallas, which catapulted 38 places. UT-Dallas’s rise was buoyed by stellar admissions standards and career outcomes rated by its alumni. The University of Michigan-Dearborn claims the next highest gain, jumping 25 spots into 24th place. The University of Nebraska-Lincoln, University of Massachusetts-Lowell (Manning), and Florida (Warrington) all had double-digit gains.

At the other end, Louisiana State University (Ourso) had the largest fall, dropping 24 spots, just because it did not have alumni data this year. Worcester Polytechnic Institute fell 21 spots while the University of Utah (Eccles) dropped 18 places.

And Explore Our 2023 Deep Dive Into The Best Online MBA Programs: