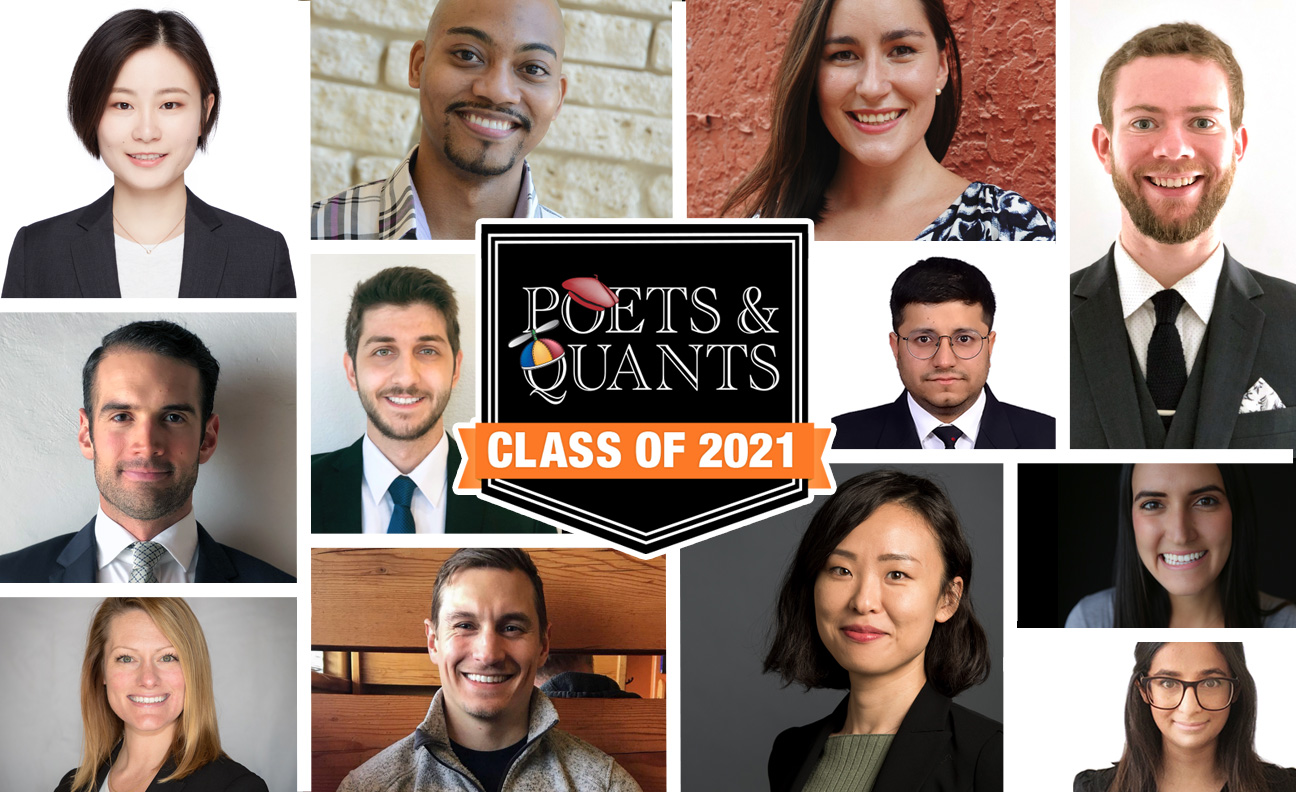 Some business schools don’t need to market themselves with rankings or ratings. Their students want to be there. Their program isn’t a safety school or a consolation prize. It is a destination, a distinctive experience that appeals to a certain type of individual.

That’s how the Class of 2021 views the Tuck School of Business at Dartmouth College. Nestled in New Hampshire’s Upper Valley, Tuck is a community where students opt-in. It is a place, says first-year Nathan Farrar, distinguished by its “small class size, cozy campus, tight-knit community, and rural setting where outdoor recreational opportunities abound.” Not surprisingly, Tuck’s Ivy League pedigree translates into a demanding academic curriculum. However, it is the type of students targeted – “smart, nice, accomplished, and aware” – that makes the Tuck full-time MBA such a transformative two years.

DARTMOUTH TUCK’S CLASS OF 2021: ‘THERE ARE NO STRANGERS’

“I like to joke that no one ends up in Hanover by accident, that this is a place where everyone says “YES!” in all caps,” writes Sophia Cornew, a 2019 Poets&Quants Best & Brightest MBA. “Everyone is all in. There is a joy and an energy that runs through this place – students talking excitedly about a lecture on their way out of the classroom, laughing and making jokes in the hallways, and greeting each other in Stell Hall. We all make a real effort to become a genuine part of each other’s lives and it is palpable on campus.”

Not surprisingly, Tuck alumni rank among the most engaged and supportive. Who would really ever want to leave? Here, MBA students are the sole point of focus which means they are showered with attention and resources by the school. Size-wise, the 284 member cohort presents the best of both worlds. It is small enough where everyone gets to know each other. At the same time, it is remote enough where everyone coalesces around one another, creating a closeness where classmates do everything together.

At Tuck, writes Roberto Ayora Peon, “There are no strangers.” The class is deeply intertwined; there are no lock-step cohorts and study groups. Even more, the majority of first-years live together in on-campus residence halls. In other words, students develop relationships quickly with a wider swath of classmates. More than that, Tuck programming is entirely student-run. For the program to work, everyone must be involved – and there’s no place to hide. That’s exactly what first-years like Sarah Elizabeth Blatt wanted in the first place. “At Tuck, I found my tribe. I didn’t want an MBA, I wanted a Tuck MBA. There are amazing schools and programs everywhere. When I’m with Tuckies, I’m home.”

That tribe includes some of the most intriguing MBAs in the Class of 2021. Take Kinan Bachour, who is earning a dual MD-MBA degree with Dartmouth’s Geisel School of Medicine. A Syrian by birth, Bachour grew up traveling around the Middle East. However, he returned to his native village as a hospital volunteer when the Syrian Civil War erupted. There, he discovered his mission to become a physician. However, his experiences have since pushed him to look at an even larger picture.

“After starting my medical training, I began to reflect on the state of healthcare in the Middle East in comparison to what I saw in the U.S.,” he writes. “From outdated practices to insufficient resources, I realized many had been denied the intrinsic human right of competent healthcare. My dream of becoming a doctor first started in my village but quickly evolved into something bigger. I now aspire to be a leader in healthcare and to bring groundbreaking changes to regions in the world that are most in need of such change.”

NO EXPERIENCE, NO PROBLEM

Carol Maria Reyes Rios completed two internships with the U.S. Department of State before becoming a Fulbright officer, where she managed grants for 18 countries. In addition, she headed global programs for Miami Dade College, the largest college in the United States with over 165,000 students. As part of her role, Rios built partnerships with public and private institutions, not to mention foreign governments. Such relationships enabled her to fulfill her signature project, a global education program targeted to homeless and foster students. Tuck students in Italy as part of their First-Year Project

“I launched the initiative, Educate Tomorrow Abroad by competing against 10 top universities to win a national innovation competition. We successfully partnered with Delta Airlines and a non-profit focused on at-risk youth called Educate Tomorrow. So far, Educate Tomorrow Abroad has enabled over a dozen homeless and foster students to study in Asia, Europe, and Latin America. The program was featured in The New York Times earlier this year too!”

Across the country, Corey Hester made his name in Alaska. Starting out as a journalist, he eventually climbed the ranks in Anchorage, working at the Chamber of Commerce and earning appointments from the mayor and governor to various boards. Eventually, he was named the executive director of the state’s largest and oldest non-profit aviation firm – despite bringing no aviation experience. Turns out, Hester already possessed all the tools to continue its success.

“During my tenure with the association, we went through an explosive growth phase,” he explains. “We increased revenue by 40% and membership by 50%, tripled our staff size, and created three new statewide outreach programs.”

Think that’s impressive? At 24, Zoya Imam was conducting risk analytics on $10 billion dollars a month across 13 sub-asset classes of portfolios. Before she was 30, she was already overseeing investments for a Pakistani VC fund. Zoya wasn’t just the first female to achieve this feat in her country, but also the youngest. Her biggest strength? Multitasking!

“One example of this is when I was juggling: a feasibility analysis on a $40 million dry port project associated with incoming CPEC traffic into Pakistan; building a business case on how to effectively introduce usage-based insurance into the Pakistani market; and negotiating a contract with the government and four other stakeholders to set up the National Incubation Center for tech startups in Karachi. These experiences have not only taught me a lot about time management and managing delicate stakeholder relationships.”

Looking for a classmate who can beat the odds. Try Sarah Elizabeth Blatt, a U.S. Army Intelligence Officer who became a wine consultant. Her claim to fame? “In 2010, I competed against three men for over 72 hours in a series of physical and mental challenges for a slot in the Army’s only special operations aviation organization,” she writes. “I succeeded in earning the position, becoming the fifth woman in the unit’s 30-year history to join. I was also the first woman to ever deploy as part of that organization’s most elite task force. In my life to date, I’m most proud to be counted among these incredible service members and continue to live by our motto of never quitting.” Tuck students hanging out (outside) in the winter months.

That’s just the start. Nakul Arora quadrupled his hotel’s revenue in just 18 months. Zanzhou Zhang helped win a billion-dollar project for one of China’s top real estate firms. As a project manager, Nathan Farrar, a cave explorer and environmental scientist, oversaw environmental cleanup of U.S. military installations (earning his firm’s Employee of the Year Award in the process). Zoë White made her reputation in the entertainment field. She was named among the Front Office Sports Rising 25 for her work as a marketing manager for the NBA’s Atlanta Hawks. After earning a Ph.D. from Stanford in Chemical Engineering, Ranulfo Allen used his postdoctoral research to commercialize a new sensor technology he created.

“Starting a company is extremely scary but somehow everything came together well.” Allen writes. “It was the culmination of several years of research and could only be done by properly managing a team of graduate and undergraduate students, recruiting co-founders, and nurturing key business partnerships.”

Allen has come a long way from college, where he as part of a hip-hop dance group. Corey Hester expresses himself through photography, noting several of his shots have gone viral on social media. If you think New Hampshire is too far out and quiet, just wait until you hear from Nakul Arora.

“Having done five Vipassana meditation retreats, I have spent a total of 50 days in absolute silence, totally cut off from the rest of the world.”

SEE THE ENTIRE MEET THE CLASS OF 2021 SERIES